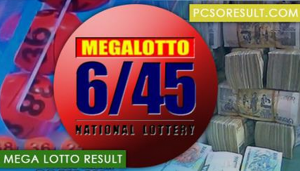 MANILA — Not all “winners” in this election season are politicians.

An unemployed woman from Pangasinan province dreamt of one day walking the aisle with her live-in partner in a grand celebration. Now, they are just a few weeks away from fulfilling that dream as she recently claimed the over P44-million jackpot prize in the April 29 draw of the Mega Lotto 6/45.

The 29-year-old mother of one was the sole player to correctly pick the winning number combination 11-23-33-37-44-45. She got the correct combination by availing herself of the Philippine Charity Sweepstakes Office’s (PCSO) lucky pick feature, which electronically picks a combination for the player.

By buying a single ticket worth P20, the winner is now richer by P44,258,488. For the safety and security of the winner, the PCSO does not reveal the identity of its winners.

PCSO Vice Chair and General Manager Jose Ferdinand Rojas II said that the winner started playing the lottery only in January last year in the hope that she would have the money for her and her live-in partner of four years to be wed in a grand church wedding.

“It’s really my dream that we be wed in the church so that our union will be legal,” the winner told Rojas when she claimed her prize at the PCSO’s head office on Friday.

Rojas said that since the winner has been managing the household’s finances from the earnings of her partner, a jeepney driver, she would usually save some money in order to place a bet.

After spending part of her winnings for her upcoming wedding party, the winner told Rojas that she would use her prize to buy a fleet of jeepneys, which her partner would manage. She added that she would also use her winnings to buy a house and lot for her family, and save the rest for the future needs of her three-year-old son.

Since the start of the year, over a dozen lotto players have already won and claimed the PCSO’s jackpot prizes. Currently, the PCSO has five existing games, wherein players can win at least P6 million nightly.

Lotto players have at least a year to claim their prize before it reverts to the PCSO’s charity fund, which supports the agency’s flagship Individual Medical Assistance Program that subsidizes the hospital bills, among others, of Filipino patients in need of financial help.

For every peso earned by the PCSO, 55 percent of it goes to the prize fund, 30 percent to the charity fund and the remaining 15 percent to their operations since the agency does not receive any funding from the national government. (With a report from Carmela Canonizado, trainee)  SFM