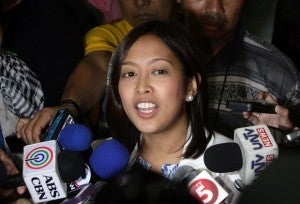 In the gated community of Barangay Bel Air, Peña got 3,061 votes versus Binay’s 1,516.  He also led the polls in the rich communities of Barangay Forbes Park, Barangay San Lorenzo and Barangay Dasmariñas where the margin of votes ranged from 100 to more than 1,000.

Former Ambassador to Mexico and Barangay San Lorenzo resident Delia Rosal told the Philippine Daily Inquirer that most of the residents in their village were “for Peña.”

“We were very vigilant here and we made sure that there will be no cheating,” Rosal added.

The long-time resident of San Lorenzo who has been active in various village activities especially those against corruption said she volunteered during the election “for a peaceful and orderly election in the barangay.”

“You know it has been 30 years, we need to have new leaders,” she said of the Binay leadership.  She described the hold on power of the Binay family as “too much.”

Rosal said they were hurt by the possibility that the Binay camp manipulated results in some barangays in the city.

Some poll watchers of Mayor Peña claimed that cheating happened in four precincts in the Pembo Elementary School, prompting them to barricade the entrance of the school to stop teachers from turning over the election returns to the Makati Coliseum on Monday night.

Peña’s camp said on Wednesday that they were studying their options and looking at possible evidence of vote manipulation especially in District 2. The mayor, however, asked his supporters to remain calm and wait for the final action from his camp.

“I understand that you are all emotional but I hope we all set aside these emotions first to avoid any trouble. Now, we are continually studying everything to shed light on this issue,” read Peña’s statement.

Asked about the cheating allegations, Binay said Peña’s supporters could not fully understand the election process. “They cannot interfere with the transmission of results because that would be an election offense. It is also a sign of desperation,” Binay said before she was proclaimed the winner early Tuesday morning.

She reminded Peña’s camp that the Binays were no longer in power on election day and were not in any position to tamper with the results of the election. “Also, we are not candidates of the administration. He has the machinery for that,” Binay said. (With reports from Angelica Cruz and John Cyril Yee, trainees).  SFM