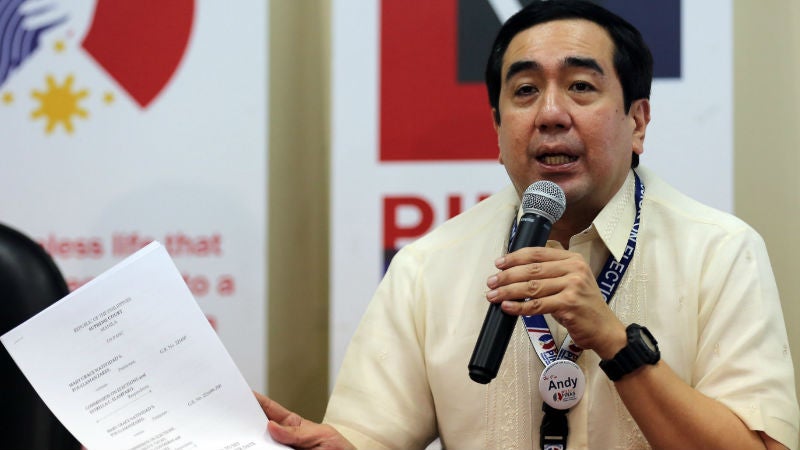 Commission on Election (COMELEC) chair Andres Bautista during a press conference at Intramuros, Manila ehere they filed a motion for the oral arguments to be set on January 14 instead of January 19.
INQUIRER PHOTO/RAFFY LERMA

EDITOR’S NOTE: The original newspaper headline has been reedited for greater clarity

COMMISSION on Elections (Comelec) Chair Andres Bautista said the poll body may consider the mandate given by the electorate to presidential candidate Rodrigo “Digong” Duterte in resolving the pending appeal on the disqualification cases against him.

Voting unanimously, the First Division of the Comelec dismissed in February all disqualification cases filed against Duterte, the tough-talking mayor of Davao City.  However, two of the petitioners filed an appeal for reconsideration of the decision.

“We will study that, but of course, we know that we also have to respect the mandate given to him by the people,” said Bautista when asked if the pending cases against Duterte could already be considered moot and academic now that he was the apparent winner in the presidential race.

“That (case) has been raffled to a ponente. I guess we (the Commission en banc) need to discuss what to do,” said Bautista.

Asked why it took a long time for the Commission to deliberate on Duterte’s case, Commissioner Luie Guia said the poll body was handling 200 to 300 cases of disqualification. “We had to rush almost everything,” he said.

Guia added that the last-minute changes in the procedures and preparations for elections occupied much of their time.

“It’s difficult to run an election, then we still have to decide on cases, so we apologize if the resolutions of some cases were delayed,” he said.

Asked if the decision would be released before the proclamation, Guia said: “It will come. It will be released, don’t worry about that.”

David and Castor had asked the Commission to reverse the First Division ruling.