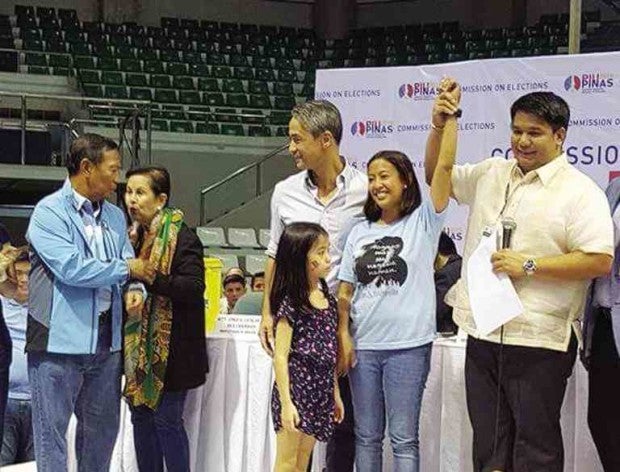 DAUGHTER’S TURN Makati Rep. Abigail Binay (hand raised) is proclaimed as new city mayor on Tuesday. Behind her is husband Luis Campos, who will succeed her at the House. Joining in the celebration (left) are her parents, Vice President Jejomar and former Makati Mayor Elenita Binay. JOHN CYRIL YEE

The victory ensured that her family would remain a power bloc in local politics even though the patriarch, Vice President Jejomar Binay, lagged behind in the presidential race, based on unofficial canvassing results.

The elder Binay, wife Elenita and son Junjun—who had taken turns at the mayoralty since 1986—led the cheering as Abby was formally declared winner over Romulo “Kid” Peña.

The 40-year-old congresswoman earned 153,976 votes compared to Peña’s 137,978. The Makati Comelec stopped counting ballots at around 95.5 percent of the votes cast and declared Binay the winner around 4 a.m. on Tuesday at Makati Coliseum.

Abby celebrated also with husband Luis Campos, who topped the congressional race in the 2nd District to become her successor in the House. Tae kwon do champion and former actor Monsour Del Rosario won as congressman for the 1st District.

The Binays’ party, the United Nationalist Alliance (UNA), also got all eight slots for councilor for District 1, with actor Jhong Hilario earning the most votes with more than 80,000. He is joined by Ferdie Eusebio, Rico Puno, Ichi Yabut, Mayeth Casal-Uy, Romy Medina, Ma. Arlene Ortega and Jojo Javier.

The conduct of the voting and canvassing in Makati went relatively smooth until Peña’s supporters in District 2 questioned the low number of votes in his favor at his supposed bailiwick.

They noted that the Liberal Party candidate received zero votes in four precincts at Pembo Elementary School, prompting them to barricade the entrance of the campus to stop teachers from turning the election returns over for canvassing at the coliseum.

The incident in Pembo forced Peña supporters to also stop the transport of election returns in Barangay Cembo, Rizal and Comembo. They asked for a manual recount, saying it was impossible for Binay to lead in these areas.

Teachers complained of being harassed by Peña’s supporters, who prevented them from leaving their schools. Rizal Elementary School principal Zenaida Peñafuerte, who asked the media for help at around 11 p.m. on Monday, insisted “there are no zero votes here. It would be impossible and we would not risk our jobs just to cheat.” With Aie Balagtas See, Angelica Cruz and John Cyril Yee