Duterte is ahead of Roxas by at least 6 million votes. Roxas overtook Senator Grace Poe at second place according to the latest partial and unofficial tally of the Commission on Elections (Comelec).

“According to the unofficial tally of Comelec, Mayor Digong is the clear winner. I wish you success, Mayor Duterte. Your success is the success of the Filipino people,” Roxas said.

Supporters of Roxas were seen crying as he delivered a speech at a packed function hall at the Balay headquarters in Cubao, Quezon City. Roxas was with his wife Korina Sanchez.

Roxas, who looked upbeat as he entered the hall, followed rival Poe’s lead, who conceded to Duterte over the phone and later to the media at midnight.

The administration candidate thanked President Aquino and his family, the Liberal Party and its allied parties, the non-government organizations, civil society organizations, and his support base—“The Silent Majority”—and all the ordinary citizens who supported him in his campaign.

“Sa lahat pong tumayo, to all of you who took up the cudgels, who shared in our aspirations, na nakasama kong tumayo, maraming-maraming salamat sa inyong lahat,” he said.

Roxas thanked them for being with him until the end of his rough campaign for the presidency.

(Every day, you were with me to face the challenge. I know that many of you stuck your necks out for this fight. But despite it all, you never let go. You stood your ground. You were with me until the end.)

As Roxas slowly exited the room, his supporters, while tearing up, sang “Bayan Ko” and then cheered “Mar Roxas! Mar Roxas!” 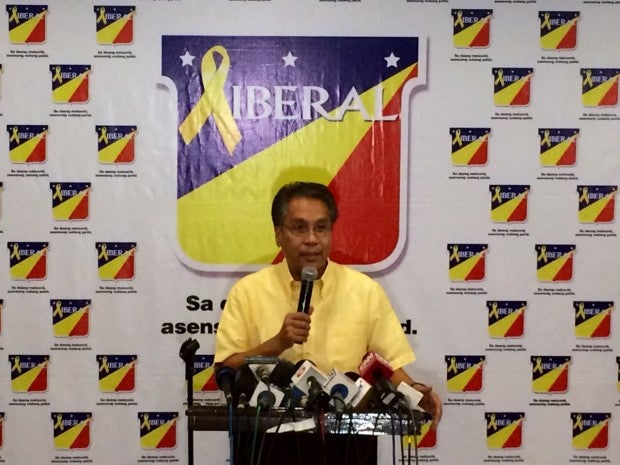