Terrified voters stayed away from poll precincts Monday after killing of Army soldier
By: Rachel Arnaiz - @inquirerdotnet
Inquirer Visayas / 01:49 AM May 10, 2016 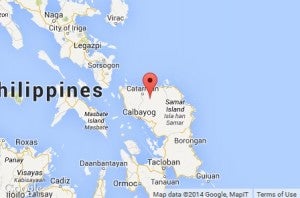 CATARMAN, Northern Samar—A remote village in Lope de Vega town in Northern Samar will hold a special election on Tuesday  (May 10) after voters refused to go to the polling precincts on Monday, following the killing of an Army soldier.
Lope de Vega municipal election officer Vivien Bido said residents left their homes in Barangay Roxas and went to the Poblacion after snipers of the New People’s Army killed Sgt. Gilbert Toledo of the Army’s 82nd Division Reconnaissance Company while he and his platoon members were conducting security operations in the village on Sunday afternoon.

“They (voters) feared that there might be another encounter and they may get caught in the crossfire, so they left the place for safety,” Bido said.

She said she decided to transfer the election in Barangay Roxas to the Poblacion and bring the vote counting machine to the municipal auditorium.

Bido said she had asked the Commission on Election central office to hold a special election for the 169 registered voters of Roxas on Tuesday.

“I requested to push through with the elections tomorrow, May 10. I’m positive it will be approved because it has the approval already of our provincial and the regional offices,” Bido said on Monday.

The voters of Barangay Roxas have been staying with their relatives in the town and will return to their homes upon the easing of tensions in their village.

Barangay Roxas is the most remote village among the 22 barangays of Lope de Vega town. It is three hours away from the Poblacion on board a motorcycle–  the only motor vehicle that can get into the village.  SFM