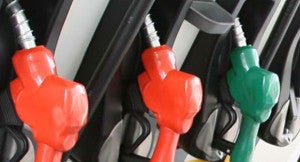 MANILA –Oil firms have announced they will trim prices of fuel products this week as international prices have declined on lower demand.

According to its advisory on Monday, Petron will implement a rollback in prices from 12:01 a.m. Tuesday, May 10, at a rate of 30 centavos per liter for gasoline, 20 centavos/L for diesel, and 40 centavos /L for kerosene.

Shell, another major oil firm, has announced it will implement price cuts at a rate of 30 centavos/L for gasoline, 20 centavos/L for diesel, and 40 centavos /L for kerosene starting 6 a.m. Tuesday, May 10.

Minor oil firm Phoenix Petroleum said it would trim the price of its gasoline products by 30 centavos/L and diesel by 20 centavos/L starting 6 a.m., Tuesday, May 10.

Other oil firms have not given price advisories as of this writing but are expected to make similar adjustments as they are affected by similar price factors such as international price, foreign exchange, and taxes, among others.

“In previous trading weeks, there was still hope on price freeze via OPEC’s (Organization of the Petroleum Exporting Countries) curtailed production to defend prices,” Energy Secretary Zenaida Monsada in a press briefing. “During the last trading week, demand came out low so even those that wanted to drive up prices could not keep the levels up.”

Monsada also noted that some refineries that went on preventive maintenance recently have started resuming operations. “They usually go on maintenance during the summer but they were expected to be back this month (May),” she said.

Around end-April, market sentiment cooled following failed talks between members of the Organization of the Petroleum Exporting Countries and a handful of outsiders such as Russia who are also major petroleum exports. However, prices became volatile again since then.

Saudi Arabia and other leading exporters have expressed willingness to control output if other major exporters would do the same but Iran, which has just been released from U.N. and U.S. sanctions, has
consistently said it will not cut production and will revive its former stature as a major oil exporter.  SFM