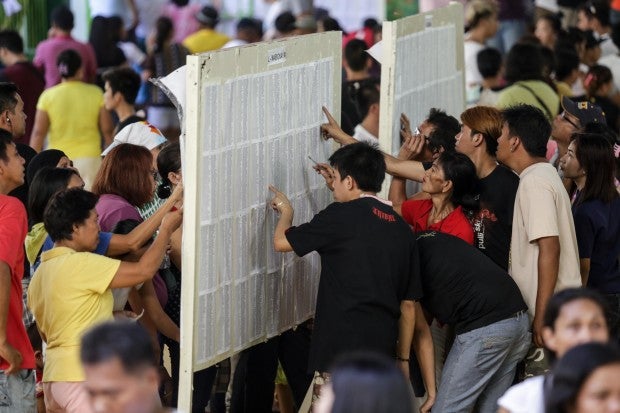 Voters line up to check their polling precinct numbers during the national elections on Monday. TRISTAN TAMAYO/INQUIRER.net

Exceeding its expectations, the Commission on Elections (Comelec) on Monday night announced that the voter turnout for the May 9 elections was at 81 percent, the highest among the three automated elections held in the country.

There are at least 54.5 million voters who registered for Monday’s polls.

Comelec Chair Andres Bautista announced the figure amid praises for the fast transmission of the voting results from more than 92,509 precincts nationwide.

Bautista said that during the 2010 presidential elections, the voter turnout was at 74.8 percent while in the 2013 elections, it was 77 percent.

As of 8 p.m., the transmission rate was at 65 percent with Davao City Mayor Rodrigo Duterte and Sen. Ferdinand “Bongbong” Marcos Jr. leading the presidential and vice presidential races, respectively.

Among the country’s 19 regions, the National Capital Region, Region 3 and Region 4-A have transmitted more than 70 percent of the votes from the precincts to the Comelec.

Asked what was the strategy adopted by the poll body to secure a high transmission rate, a smiling Bautista said: “We just planned ahead.”