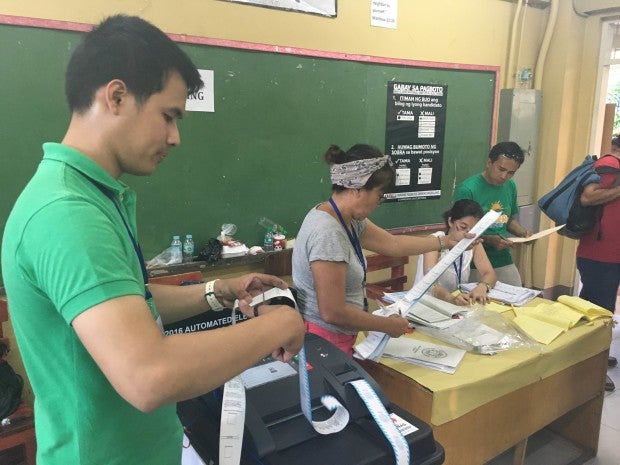 Board of election inspectors process the transmission of election results at a precinct in Manuel Roxas High School in Paco, Manila. ANTHONY Q. ESGUERRA/INQUIRER.net

Election watchdog Legal Network for Truthful Elections (Lente) on Monday said it observed an “unsettling trend” of increasing election-related violence and deaths during the 2016 elections.

Lente, run by lawyers, law students, paralegals and 6,000 volunteers nationwide, said they monitored unlawful entry of personnel of the Armed Forces of the Philippines, Philippine National Police and barangay officials in polling precincts.

The network also noted a “worrisome increase in the number of missing names in the voters’ list manifesting voter disenfranchisement.”

Malfunctioning vote-counting machines stalled the electoral process across the country, Lente said, with some acting up as early as 8 a.m., causing long queues in voting precincts.

The network, however, lauded the “smooth” detainee voting in jails, saying it had been completed as early as the 2 p.m. deadline.

“Our volunteers reported that detainee voting went smoothly and without any irregularities, save for its delayed start,” Lente said.

Lente called on citizens to continue watching out for election offenses and report them through its hotlines.

The group also called for prudence on the part of voters, political parties and accredited citizen’s arms in dealing with information, especially those coming from online sources.