Battalions of lawyers to defend Poe, Escudero from poll fraud 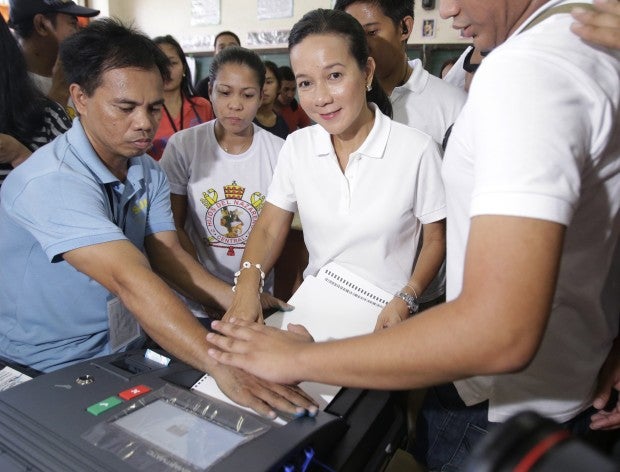 Presidential candidate Grace Poe, center, votes at a polling center in San Juan, east of Manila, Philippines on Monday, May 9, 2016. Millions of Filipinos trooped to elections centers Monday to pick a new president, vice president and thousands of other officials amid tight security across the country. AP

At least 700 lawyers, IT experts and volunteers have been mobilized to ensure that votes for Senators Grace Poe and Francis “Chiz” Escudero are counted, their lawyer said on Monday.

Lawyer George Garcia, head of the Grace Poe and Chiz (GPC) legal team, said their lawyers and volunteers are ready to do their duties to protect the integrity of the national elections and the votes of their presidential and vice-presidential contenders.

“We are about to start the next crucial chapter of the electoral process, which is the counting of the official ballots. Our volunteers are not only here to guard the votes of the Poe-Escudero tandem, but also to fight any attempt and any form of poll fraud,” Garcia said in a statement.

“More than winning, we would like to see this political exercise that will elect our country’s 16th president as credible, fair and democratic as possible,” he added.

READ: Escudero: Only admin is capable of cheating, but…

Garcia said the GPC legal team was organized as early as March and they expect more lawyers, IT experts and volunteers to join them before Congress sits as the National Board of Canvassers on May 24.

The GPC Legal Team has set up its headquarters in the clubhouse of the National People’s Coalition (NPC) in New Manila, Quezon City.

The NPC, the country’s second biggest political party which was founded by businessman Eduardo “Danding” Cojuangco, is supporting Poe and Escudero.

“Our battalion of lawyers and volunteers will be here to help until the last vote is counted,” Garcia said. IDL/rga