Leni Robredo went back the way she came–on a bus 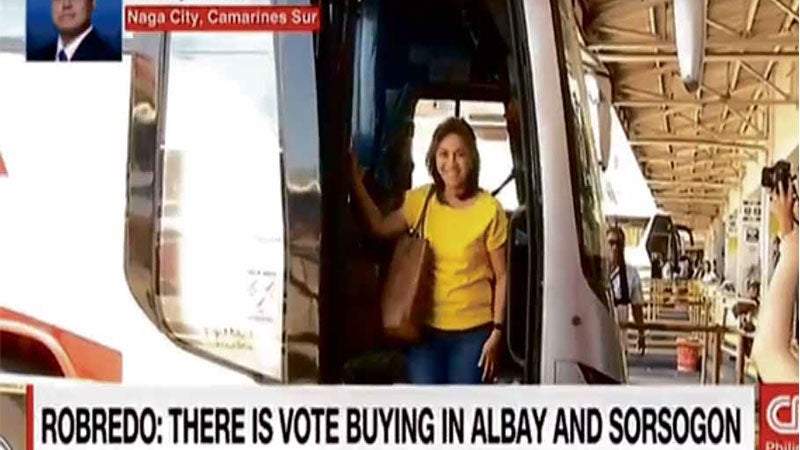 ROBREDO alights from the bus that took her back home toNaga, in this photograb from the Facebook page of CNN Philippines.

NAGA CITY, Philippines—Liberal Party (LP) vice presidential candidate Leni Robredo took a 12-hour public bus ride from Quezon City to her hometown on the eve of Election Day in what she hoped would be a storybook end to an underdog campaign.

Heavy traffic delayed the trip by two hours, but the Camarines Sur representative, in a yellow shirt and wearing no makeup, was all smiles as she greeted and posed for pictures with well-wishers upon alighting at the Naga terminal at a little past noon.

She was with her three daughters Aika, Tricia and Jillian, four in-laws, her staff  and members of the media.

The 51-year-old Robredo tried to brush it off as nothing more than her usual homecoming, saying a plane trip would cost a lot more. Still she was concerned about the presence of the small army of reporters and cameramen.

“I hope [my town mates] are not turned off because of all the media around,” she said.

The widow of Interior Secretary Jesse Robredo had planned to attend morning Mass but had to scrap that because of the traffic delay. After a private lunch with family, she was off to her district office to meet with her staff.  She planned to visit the Carmelite Monastery later in the afternoon to pray.

Candidates are barred from campaigning on the eve of the elections.

Speaking to reporters at the bus terminal, Robredo ruminated on the importance of Monday’s electoral exercise in deciding the future of the country. She said she prayed the people would elect the right leaders, and that the elections would be peaceful.

She was also glad to spend Mother’s Day with her daughters, but added that she hoped to be “a mother not only to my children but to the nation.”

Her eldest daughter, Aika, said she was just happy to survive the frenetic campaign. “Finally, it’s over,” she said.

But perhaps not quite yet.

Robredo, who was thrust into politics after her husband died in a plane crash in August 2012, started out as a little-known underdog when she accepted the offer to be the running mate of LP standard-bearer Mar Roxas.

But the only woman among the vice presidential candidates slowly upped her profile among voters—from 1-percent rating in October, she is now running neck and neck with  front-runner Bongbong Marcos.

Her platform is focused on alleviating poverty and providing assistance to those living on the fringes of society; empowering women and children, and promoting transparency and honesty in governance.

Robredo will cast her vote at Tabuco Central School only minutes away from the family home.