Her live-in partner’s weakening condition—brought on by complications in his heart, lungs and liver—has sent Roda Cuizon into panic.

“He may not be perfect as a husband, but I can’t imagine seeing him that way—knowing that his vital organs are not doing well. He has a weak heart. There is water in it, making it swollen. There is a cyst in his lungs and his liver is also affected,” she told the Inquirer, referring to her partner Joewan Nique.

A tricycle driver in Gen. Mariano Alvarez, Cavite, Nique who is also the sole breadwinner in their family was first rushed to the Ospital ng Muntinlupa in February due to difficulty in breathing.

Doctors told him that he needed a heart operation with the cost estimated at P500,000. 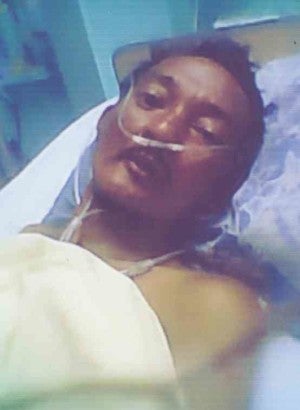 Unable to raise the amount, the couple asked for medication and then went home, only to return a month later when Joewan developed an infection.

“It was at this point that we went to the Philippine General Hospital,” the

Roda told the Inquirer that her 42-year-old partner, with whom she has four children—was scheduled to undergo a biopsy of the cyst in his lungs. “Kindly help us defray his biopsy expenses of P4,000. We also need to buy 30 pieces of Isoniazid and 20 pieces of Streptomyzin costing P10,000.”