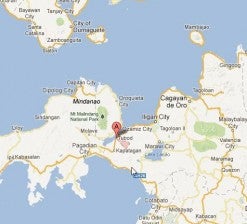 MUNAI, Lanao del Norte – Supporters of mayoral candidate Dante Batinggolo of the Liberal Party here, have blocked the transfer of the vote counting  machines from the municipal hall to the polling precincts.

And with only a few hours left before polling precincts open for voters, none of the 27 vote counting machines here have been tested and sealed.

Lieutenant Colonel Leomar Jose Doctolero, chief of the 15th Infantry Battalion, told the Philippine Daily Inquirer Sunday night that supporters of mayoral candidate Dante Batinggolo of the Liberal Party blocked the transfer of VCMs from the town hall of Munai to the polling precincts. 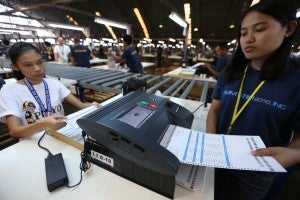 An example of the vote counting machines being distributed to polling precincts nationwide for the May 9, 2016 elections
INQUIRER PHOTO / NINO JESUS ORBETA

“If we force transferring the VCMs, there will be trouble,” Doctolero said. He could not say in detail why Batinggolo’s group blocked the transfer of the VCMs.

Munai Commission on Election officer Mastura Aleola was still at the municipal hall, as of this posting, but could not be contacted by phone.

Doctolero said if Batinggolo’s camp would just allow the Comelec to bring the VCMs to the polling precincts, the final testing and sealing would be done in the first few hours of election day, Monday (May 9).  SFM