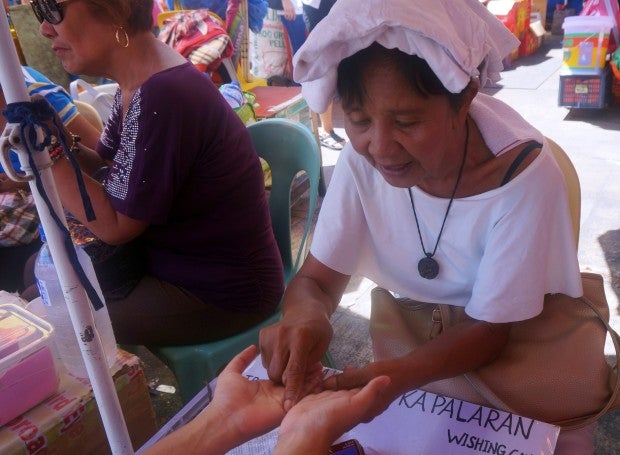 Madam Espi stood out among the old fortune-tellers occupying rows of tables at the corners of Plaza Miranda one Sunday morning. She was dressed in white—in sharp contrast to the dirty and rowdy streets of Quiapo district in Manila.

Esperanza Ripalda, 68, claims to be able to tell one’s past, present and future. But these days, clients are more interested in the state of the nation and are more inclined to ask one question: “Who will be the next President?”

While she says she can peek at tomorrow, she believes democracy could change many lives, with or without the dictates of those claiming to have the God-given ability to “see.”

“Every election, I go out and vote. But choosing a candidate depends on one’s own feelings. Whatever your heart tells you, you must go with it—choose yourself because you are in your own kingdom. Use your own wisdom for the greater good,” she said.

For 30 years, fortune-telling has been Madam Espi’s main source of livelihood, though not a lucrative one. She first came to Quiapo to serve her calling in 1986 when democracy has just been restored after years of Marcos dictatorship. Nothing much has changed.

“Three or four people avail of my services every day. I need to stay here all day because this is my only job. This is how I earn. We only get more customers during Fridays, because of ‘Quiapo day,’” said Madam Espi, who charges P50 to P100 per customer.

Most of the time, her earnings are not enough.

Madam Espi lives alone. When she seeks company, she would stay at her nephew’s house and pay for food, electricity and water. Her four children, who live in Bicutan, have families of their own.

“Now, I’m a squatter here in Quiapo, living and sleeping inside a home that isn’t mine. Sometimes I wish I could go home to my sons and daughters, but I don’t have enough money,”  she said.

Madam Espi hails from La Paz, Tacloban City, in Leyte province. Her mother was a fortune-teller while her father, a faith healer. She said her father could walk on water.

When she was 12, her mother gave her a wooden rosary and pamphlet of the Novena to Our Mother of Perpetual Help, which she kept inside her belt bag. She said she used these to master her craft.

“Prayer answers everything. It gives us the gift of the tongue. If I don’t pray, life will be reduced to nothingness. We live in prayers, this is our power,” she said.

Madam Espi and the other old women shuffling tarot cards in front of the Minor Basilica of the Black Nazarene may be a microcosm of the country’s fascination with the religious and the divine and the magical and the miraculous to seek for answers that logic and science couldn’t fathom.

Her story illustrates the plight of over six million senior citizens, or citizens 60 years and over in the country. This represents 6.8 percent of the country’s current population based on the 2010 Census of Population and Housing.

The figures are expected to shoot up to 23.6 million by 2050, according to the United Nations Population Fund.

“Although we have a relatively young population, our most conservative statistics show that there are currently about 6.95 million senior citizens residing in our country, 1.18 million of them are living below the poverty threshold,” said Mila Magsaysay, representative of Senior Citizens party-list.

The Philippines has an aging populace. More than ever, it is important to promote the issues of social security, healthcare and welfare of senior citizens, according to rights advocates.

Their societal and economic inclusions, according to Magsaysay, should also be addressed early on.

Republic Act No. 9994, or the Expanded Senior Citizens Act of 2010, aims to grant the elderly with special privileges and benefits to maximize their contribution to nation-building. But at the height of the Social Security System (SSS) pension issue this year, Magsaysay and her party-list group felt the need to explore measures to give the aging population the life they deserve.

“There is more dignity for our aged that comes with the pride of self-reliance, rather than sitting around and waiting for monthly dole outs,” she said.

While they believe that the pension increase is possible by increasing the collection of SSS contributions, the most sustainable solution lies not on social security pensions alone but in giving entrepreneurship opportunities to senior citizens after retirement.

“I will not stop working until I have enough money to buy myself a home. It need not be grand, even if it’s just a nipa hut, it’s OK,” Madam Espi said.

She believes it would not be a long wait, for a better life is coming to Filipinos when her candidate wins in the next elections. She could only do what she does best for many decades: live up to her namesake, Esperanza, and hope. TVJ

‘We’ve seen how easy it is to forget promises’