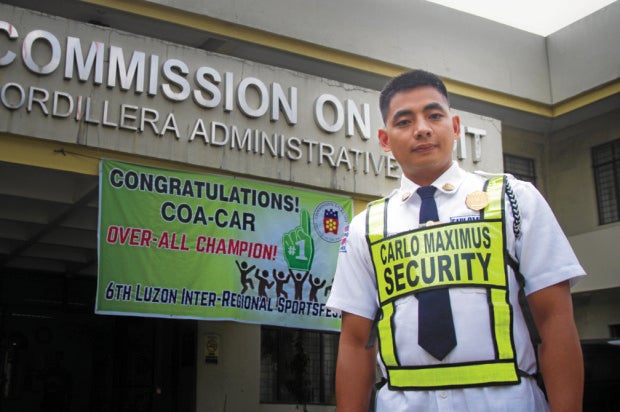 BAGUIO CITY, Philippines—Drinking buddies of Roy Lawagan, the security guard who passed the 2015 bar examination, now consider him their inspiration.

“Every time we feel our workload and schedules are in conflict with our law studies, we think of Roy,” said Rocky Jake Ngalob, a law student working at Benguet State University.

Lawagan, who worked the graveyard shift while attending law school, became an instant celebrity when his story about passing the bar came out this week.

“He was a full-time student [at Saint Louis University (SLU) law school], while working as night watchman at the Baguio cemetery. Now he’s become an agent in the administration of justice,” Ngalob said.

Lawagan would borrow books from the library and read them in the cemetery, Ngalob said of the new lawyer who said he will stay on as security guard at the Commission on Audit (COA) in La Trinidad, Benguet province, until May 15.

“There were even times when he would go straight to the library to study after his night shift at the cemetery,” Alangui said, adding that during his morning jog, he would stop by the cemetery to chat with Lawagan.

Before his watchman stint at the COA, Lawagan also worked at the Baguio City slaughterhouse.

Alangui, who works in a nongovernment organization, said juggling work and law school isn’t easy, but that Lawagan’s success has inspired him to persevere.

“During my freshman year, I was a full-time student. I had no job but I already found it difficult managing my time,” Alangui said.  “Looking at Roy’s achievement drives me to work harder,” he added.

After winding up his COA stint in mid-May, Lawagan said he will take up a cousin’s offer to join a law firm in Manila.