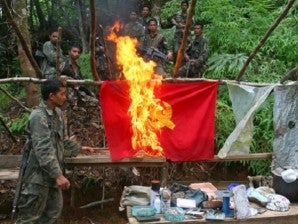 MANILA — The military is checking reports that communist rebels campaigning for national candidates in Samar have threatened to execute local officials if their bets lose in their areas.
Fifteen fully armed New People’s Army members were seen campaigning for a certain presidential candidate and a congressional candidate in Barangay Candomacol, Motiong in Samar.

In a press briefing in Camp Aguinaldo, Padilla, however, did not name the candidates being lobbied for by the rebels, to avoid being dragged into political partisan conflict.

“I believe there was no gunfire, no violence that ensued. We are following up on these reports and the necessary activities to secure these areas so that people can freely choose who they want to vote for without being intimidated by these armed groups,” he said.

He added that the residents of barangays Calapi, Bunga, and Malobago in Motiong, Samar, requested the military for additional troops due to the presence of the NPA.

“The AFP has responded to these reports and continues to monitor threat groups like the NPA who are terrorizing our communities,” Padilla said.

Two days ago, around 20 NPA rebels gathered 30 residents of Barangay De-it in Matuguinao, Samar, who were  political leaders of a mayoralty candidate that they were trying to influence.

Padilla assured the public that ground units have been providing convoy escort, patrols, clearing and security operations, and joint checkpoint operations in cooperation with the Philippine National Police.

In the towns of San Francisco, Puro, Tudela, and Pilar in Cebu, personnel from the 47th Infantry Battalion delivered hundreds of vote counting machines, ballot box with body and top covers, and battery kits.  SFM/rga

Read Next
Aquino’s pick for Philippine president banks on clean image
EDITORS' PICK
UK’s Boris Johnson will resign, BBC reports
Unemployment rate up to 6% in May
Geek out at TOYCON 2022 powered by Smart Signature
High inflation: Your P1 is now worth only 87 centavos
High-risk pregnancy: Reducing your risk is in your hands
House energy committee chair Arroyo bats for cheap electricity
MOST READ
Suspect in grisly killing of missing woman in Bulacan arrested
Kim Atienza’s daughter flaunts bikini body in response to critics of her ‘revealing photos’
Japanese artist who created ‘Yu-Gi-Oh!’ found dead in the sea
FDA probes popular Filipino noodle brand for ‘high level of ethylene oxide’
Don't miss out on the latest news and information.