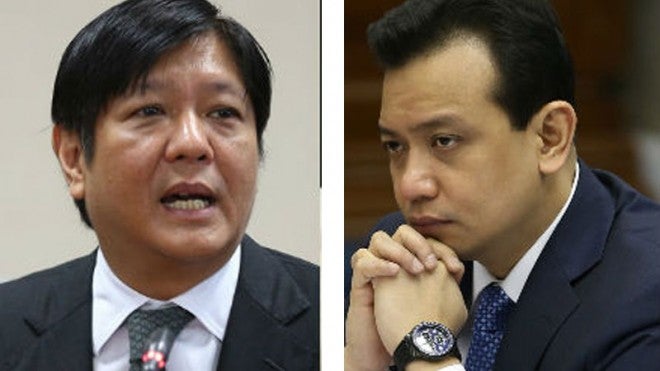 Vice presidential candidate Ferdinand “Bongbong” Marcos Jr. said he brought food, but not money, to Senator Antonio “Sonny” Trillanes IV when the latter was still in detention for leading a failed mutiny in 2003.

This was how Marcos strongly denied on Thursday a reported statement of Marine Capt. Nicanor “Nick” Faeldon that Trillanes  received money in 2004 from Marcos’ sister, then Ilocos Norte and now Governor Imee Marcos.

Trillanes and Faeldon were among the leaders of the Oakwood Mutiny in July 2003 and of the Manila Peninsula siege in November 2007.

“Why would she give him money? Para saan (What for)?” Senator Marcos said at weekly forum in the Senate.

“I still don’t understand. You give money to get something back…Ako (Me), I really don’t know of any instance where we brought money to Senator Trillanes,” he said.

Marcos admitted that he went to Trillanes’ detention to hold hearings there and when he was still running for the Senate to seek an alliance with the latter’s Magdalo group.

Trillanes was elected senator in 2007 even while he was detained.

“Usually pag pumupunta ako dun, nagdadala ako ng pagkain, nagdadala ako ng bagnet, ng longanisa, nagdadala ako ng kaht ano (Usually when I go there, I bring food, I bring bagnet and longganisa, I bring whatever)… But I never, never, I don’t know of any time that money was even spoken about. Walang pinag usapan tungkol dun (Nothing of that sort was talked about),” Marcos said.

(We go to the hearing and we really visited him while I was still running for senator. And, of course, he was already a senator and he had the Magdalo with him, so I told him we should join forces.)

Asked if the money could be in exchange for the Magdalo’s support for him, Marcos said: “I think maliwanag hindi naman nabibili si Senator Trillanes so no, no.”

(I think it is quite clear that Senator Trillanes cannot be bought, so, no, no.)

READ: WHAT WENT BEFORE: Oakwood Mutiny