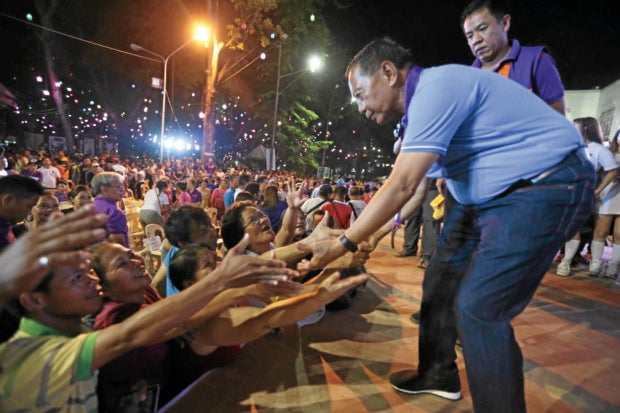 “There will be incalculable twists and turns between now and on election day. We know that there is no easy path to victory—but the ground game will spell the difference,” Tiangco said in a statement on Thursday.

Tiangco said the elections remain a tight game despite the declining survey ratings of Binay, who failed to regain his lead in the voters’ opinion polls.

“The commissioned surveys do not diminish the Vice President’s commitment to bring genuine change and lasting comfort to our people,” Tiangco said.

He said Binay’s broad coalition of partners and supporters would come out and vote on  election day to propel their presidential candidate to Malacañang.

“We believe that the election is a tight race and through our far-reaching and sustained strategy, we expect to be joined by a broad coalition of partners and supporters across the country on May 9. We are strongest when we stand together,” Tiangco said.

He said the Vice President is “determined to recapture the spirit of collective activism and will continue to fight on behalf of the Filipino people for social justice and respect for human rights.”

“There will be no letup in our efforts to communicate our message of hope and positive change,” Tiangco said.

He said for Binay, the election is not his fight alone but the “fight of the Filipino people.”

Earlier, Binay’s spokesperson Atty. Rico Quicho said the surveys do not reflect the support Binay has been getting on the ground and maintained that it will be a tight election day.

READ: Binay ‘is coming,’ despite lost lead, says his camp

He said the ground campaigning intensified after April 29 or the last day of the surveys, which may be the reason why the latest Pulse Asia survey did not capture the support for Binay, who only placed fourth in the opinion poll conducted from April 26 to 29.

“It will be a tight race all the way to election day. The surveys do not capture the intense ground campaigning by the Vice President’s core supporters and parallel groups nationwide. These efforts have intensified after April 29 which was the last day of the surveys. The final visibility push this week via motorcades, house to house campaign and sectoral events like the Indigenous People’s summit for Binay in Cagayan de Oro last Tuesday show the winning path for the Vice President,” Quicho said.

The said survey has a margin of error of plus-or-minus 1.5 percentage points. Four percent remain undecided.

Binay used to lead in the surveys, until the corruption allegations caught up with him when the Office of the Ombudsman indicted him for malversation, graft and falsification of public documents over the alleged rigging of the Makati car park building when he was still city mayor.

On Wednesday, Binay said he has lost confidence in the surveys.

Quicho said Binay’s victory will be similar to his vice presidential win in 2010, when he gained momentum in the surveys to surpass his political nemesis Roxas just before the election day.

“History will indeed repeat itself. This election will be won on the ground on election day. Let us all vote early with your family and friends,” Quicho said.

“To the other candidates: Do not celebrate yet, good things are about to happen, Binay is coming,” he added.

Meanwhile, in the final Standard poll conducted from April 27 to May 1, Binay also shed some points at 15 percent, down from 18 percent in the March 26 to April 1 survey and from 23 percent in the February 24 to March 1 poll.

Duterte remained the frontrunner in the said survey at 32 percent, followed by Poe with 25 percent and Roxas with 22 percent. Santiago placed last with two percent.

Four percent were undecided. The survey has 3,000 voting-age respondents and a margin of error of plus-or-minus 1.8 percent. RAM/rga

READ: Duterte ahead by 7 in final Standard survey