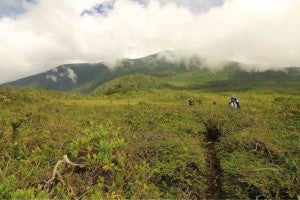 Mr. Aquino, who was in his last flurry of trips to the southern Philippine island less than a week before the May 9 elections, highlighted the Mt. Hamiguitan project as among his administration’s various tourism-related development packages in the region, particularly in Davao Oriental.

The President also noted how the province has been able to recover almost four years after Typhoon Pablo with help from the national government.