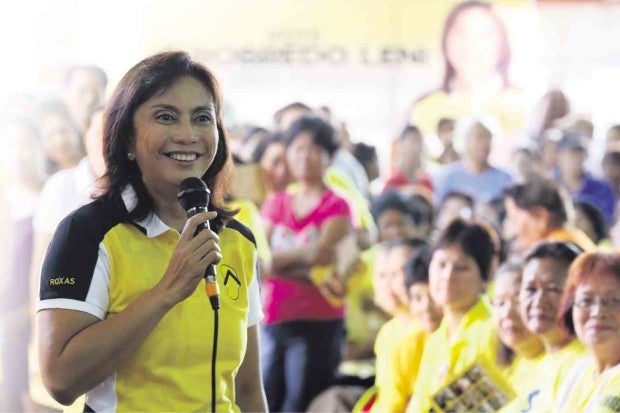 THE SUMILAO farmers had virtually no property of their own when they first marched to Manila nearly a decade ago to fight for their right to own the land they tilled.

On Tuesday, they returned to the capital now with P70 million in assets and a story to tell urban poor communities on how Camarines Sur Rep. Leni Robredo helped uplift their lives.

Cheril Lorenza told the Inquirer on Tuesday that if not for the assistance given to them by the nongovernment legal group Sentro ng Alternatibong Lingal Panligal (Saligan)—to which Robredo was an active member—they would not have won their 20-year struggle for land rights.

In 2007, Lorenza and 162 Higaonon farmers from Sumilao marched to the capital to assert that the 144-hectare ancestral land in their municipality acquired by a corporation was covered by the Comprehensive Agrarian Reform Program. Three years later, San Miguel Corp. handed over to the farmers 50 hectares of its estate and another 94 hectares within the vicinity of the contested property.

Now that her family is proud owner of a hectare of land, Lorenza said they could now finally afford three meals a day, at times enjoying a sumptuous serving of kaldereta.

The 37-year-old mother of three, who brought along her year-old son for the 19-day caravan to Metro Manila, added that because of their P80,000 income per harvest, her children were able to continue their education.

Nolan Peñas, the son of slain farmer-leader Rene Peñas, said that since they were given the lands, they had formed the Panaw Sumilao Multipurpose Cooperative, which assisted member-farmers buy their own trucks, motorcycles and farm equipment, now totaling P70 million.

Bajekjek Orquillas, the youngest farmer to join the 2007 march at 21 years old, joined the 3,700-kilometer caravan to campaign for Robredo.

With only three days left before the end of the campaign season, Peñas said they would be going around urban poor communities in Manila and Antipolo to further spread the story of Robredo’s “selflessness.”

The Sumilao farmers ended their caravan to Manila on Tuesday with a symbolic “salubong” in Alabang, Muntinlupa, where they were warmly received nearly a decade ago by thousands of supporters. Robredo’s second daughter, Tricia, was brought to tears when she welcomed the farmers on Tuesday.