The politics of charm in Philippine elections 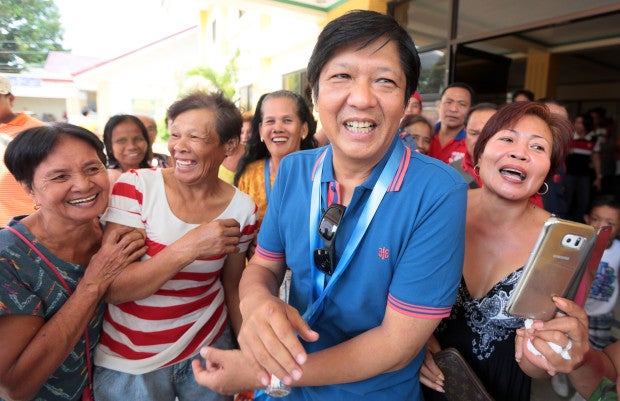 For about 15 minutes, Ruffy Biazon navigated a maze of alleys three-men wide that snaked through a packed squatters colony in Muntinlupa City.

He shook hands and waved nearly as often as he took steps. There were stops for selfies along the way. Dozens of small children orbited him. He made his way to a basketball court where about a thousand people had already been whipped up into a singing frenzy. Tall and still with boyish good looks at 47, the politician climbed onto the makeshift stage and sang Ed Sheeran’s catchy love ditty Thinking Out Loud. The women in the audience shrieked. As he sang, he threw T-shirts and baseball caps into outstretched hands.

Before the day ended, Biazon would be in three more of these “karaoke caucuses”. He would be in bed by 1 a.m. and on the road again by 6 a.m. – he has been at this every day for the past three months.

This is how politicians get their votes in the Philippines.

On May 9, some 55 million Filipinos will fill up ballots to elect their new president, vice-president, senators, and some 18,000 local officials.

Scaled up to a national campaign, the productions become even more elaborate.

In her proclamation rally, Senator Grace Poe, 47, a candidate for president, employed a floor director who instructed the audience on when to cheer and clap and when to be quiet. A popular singer and band also gave an impromptu concert.

The singing and dancing are standard fare for candidates seeking national posts. Candidates make the rounds on TV, where they play cameos in sitcoms, swop jokes, dance the Look Up, Look Up, or sing gospel hymns.

On stage, there are dancers to make them look good, stand-up comics to keep the crowd laughing and professional singers to perk up a crowd in between long political speeches.

Rodrigo Duterte, the front runner in the presidential race, cannot only carry a tune, the 71-year-old mayor’s audience roars each time he laces his over-the-top narratives with expletives. Journalists now keep a tally of how many times he curses in his campaign speeches.

The profanities usually stoke the rage at the ruling establishment among his millions of supporters who see in their candidate a no-nonsense, crime-busting, vitriol-spewing everyman.

“But there is a certain value to it because you know you worked hard for it,” he said.

“The thing with being elected, as opposed to being appointed, is that you have to campaign,” he said. “So you have to go to your constituents. You develop personal relations with them, and that gives more meaning to what you’re doing.”

Politics in the Philippines has always been personal. It’s not about the issues – what matters is who is running. Filipinos tend to vote for brand names and that loyalty is often passed down through the generations.

A voting bloc of 9 million in the northern Philippine region of Ilocos, 485km north of Manila, has remained loyal to the family of the late dictator Ferdinand Marcos.

This time, three generations of Marcoses are running for public office.

Imelda Marcos, 86, the widow of the late strongman himself and most known for her shoe obsession, is seeking a third term as congresswoman. Her eldest daughter, Imee, 60, is running for re-election as governor, while a grandson, Matthew, just 26, will likely be elected a member of the provincial board.

Then, there is Mrs. Marcos’ son, Ferdinand Jr, 58, who is on the verge of becoming the Philippines’ next vice-president.

The outcome of this patronage politics has been that in a nation of over 100 million, only about 250 families wield political power.

Faces change, but surnames seldom do. President Benigno Aquino III’s own family has been in politics since the birth of the Philippine republic in 1898.

Filipino voters are also drawn to candidates with a back story that resembles a B-movie plot. That’s why boxing superstar Manny Pacquiao ranks third out of the 52 candidates for senator, despite his dismal performance as a congressman.

His rags to riches story – the fishmonger who boxed his way to fame and fortune – simply tugs at so many voters’ hearts.

But money is just as important.

Research firm Nielsen Media reported that even before the campaign period began on February 9, candidates for president, vice-president and senators had already spent more than P7.5 billion on about 105,000 advertising spots on TV, radio and in print.

From February 9 till end-March, they spent another P2.7 billion.

The remaining 20 per cent of a candidate’s campaign fund finances the “ground war” – the posters, campaign rallies, T-shirts, caps, rubber bracelets and even rosaries, staff salaries and meals, allowances for volunteers, office leases, and car and equipment rental.

One thing that sets this year’s elections apart is the Internet’s sway over voters.

Over 44.5 million Filipinos – nearly half the population – are online for up to 22 hours a week, up from 23.2 million during the 2010 elections. Half of these log on every day.

Duterte and Ferdinand Marcos Jr are faring strongly among this most wired segment of the population.

Most are too young to remember Ferdinand Marcos’ reign of martial rule and plunder, but they have the strongest sense of disenfranchisement after living through five presidents since his fall.

“People desire change. They are fed up with politics as usual… and they are expressing that rage online,” said Vladimir de Ramos, general manager at Internet security firm AIM Corporated Solutions.

Judging by poll results, this year’s personality-driven elections will likely return the Philippines to strongman rule, and more than a few are dreading the outcome.

One of the fearful ones is Richard Javad Heydarian, a political analyst at De La Salle University.

“I’m afraid that after this highly polarizing election, our country will shatter into a thousand pieces,” he said.

“And only in those fragments will we be forced to reckon what went wrong, hoping against hope to piece together a broken nation.”