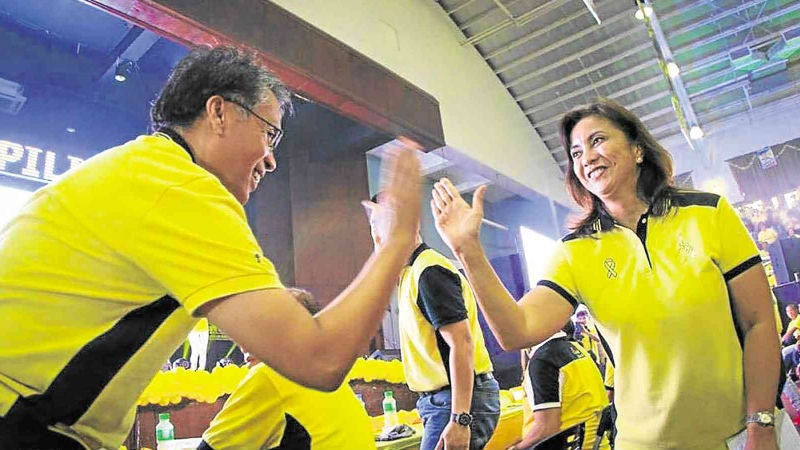 But the founder of the charismatic group was not around at the Malolos Sports and Convention Center to welcome the LP candidates who had in recent days also sought the support of other religious sects, among them El Shaddai and Iglesia ni Cristo.

Bro. Eddie’s son Joel, who formerly headed the Technical Education and Skills Development Authority, and a member of the LP’s senatorial slate, received a rousing welcome from the Malolos crowd, many of them JIL members.

Joel hugged and introduced Roxas and Robredo to his supporters who were wearing LP’s signature yellow t-shirts. In their respective speeches, the candidates were careful to acknowledge Joel’s mother Adoracion, who was seated in the audience.

It was not immediately clear where Bro. Eddie, who made failed bids for the presidency in   2004 and 2010, was when the LP party arrived, but he was also scheduled to address his son’s supporters that night.

The schedules of Roxas and Robredo had both been disrupted to accommodate the Bulacan trip, which was originally not part of their campaign itinerary for the day.

The Inquirer learned that Roxas skipped a gathering of barangay leaders in Pasay City to make it to the Villanueva event, while Robredo switched places with her eldest daughter Aika who was originally supposed to represent her there.

JIL claims a membership of four million, but they are generally not known to vote as a bloc.