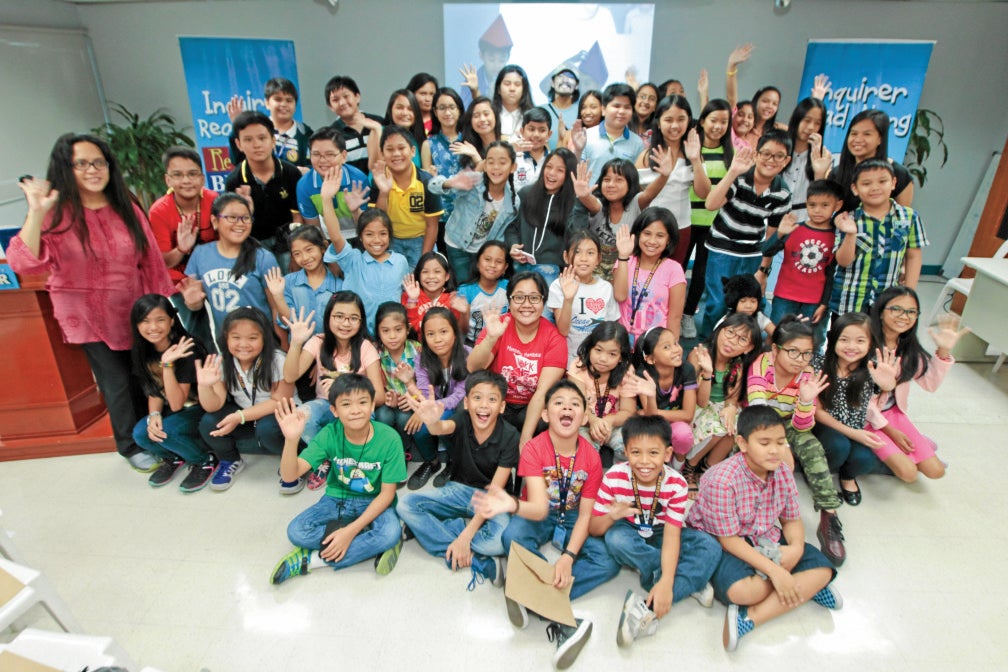 JUNIOR JOURNALISM GRADS Children
who attended the two sessions of the INQUIRER
Junior Summer Camp, where they learned the
rudiments of good journalism, pose for a
picture after their graduation at the INQUIRER
office inMakati City on Saturday. LEO SABANGAN II

MORE than 50 kids took on the role of a journalist when the Inquirer Junior Summer Camp debuted at this newspaper’s main office last month.

The three-day camp was held in two batches—April 14 to 16 and April 20 to 23—and included workshops on news and feature writing, layout and design, and photojournalism facilitated by Inquirer editor Ruth Navarra-Mayo,  creative director Ralph Bagares and photographer Raffy Lerma.

The photojournalism workshop was held at The Mind Museum in Taguig City.

“We learned that writing is fun, that information is vital, and that a journalist should open the eyes of the people,” said camp participant Gabrielle Pilapil during graduation rites held at the Inquirer office on April 30.

“Our students learned a lot from this experience. It’s their first time to try their hand in making a publication, and they really enjoyed it,” said teacher Lorna Matienzo, whose school Optimus Center for Development in Binangonan, Rizal, sent 19 participants to the camp.

“We learned the importance of teamwork. That a team—and not just one person—makes a newspaper. We also learned that the public needs newspapers to know more about things they did not know before,” said participant Anton Sebastian Montes.

“I learned more about patience,” said Stephanie Claire Enaje, adding that the main difficulty she encountered while doing their final project involved their group files getting corrupted.

When asked about their favorite moment during the camp, both batches related their experience roaming around The Mind Museum and taking photos as part of the photojournalism workshop.

Mayo noted that a lot of talents were discovered in the group. “We hope some of you would apply as Junior Inquirer snoops come January,” she said.

Said Liza Roque, whose daughter Juris was part of Batch 2: “My daughter really had a great time. She didn’t mind waking up early because we’re from Pampanga. She said she learned a lot of things. She will be joining her school publication next year. Even before this, she read and reread Junior Inquirer. It encouraged her to keep on writing.”

“My son had lots of fun in the activities and these were new to him. The camp was a good exposure. He’s just in Grade 2 and they are not yet engaged in long writing in class but here, he wrote two articles and we were surprised that he could already write a complete story,” said Victor Dugan, whose son Victor Miguel was part of Batch 1.

The Junior Summer Camp, which aims to plant the seeds of good journalism among the youth, is a program spearheaded by the Inquirer Read-Along team as part of the Read-Along’s ninth anniversary celebration.

Since May 2007, thousands of kids aged 7 to 12 have attended around 400 Read-Along sessions in the Inquirer main office and other venues.

Other Read-Along anniversary activities include a storytelling workshop on May 20 and an anniversary Read-Along session at the Inquirer main office in Makati on May 21 at 10 a.m. Interested participants may call 8978808 loc. 329 and look for Odeng.