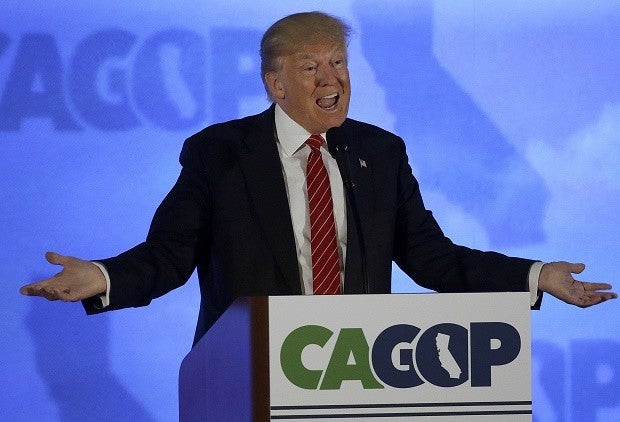 BURLINGAME, California — Donald Trump took his outsider campaign to the inner sanctum of California’s Republican party on Friday, making his case directly to the GOP’s state party convention even as angry demonstrators shadowed him outside in a possible harbinger of the controversy he will bring as the nominating process shifts toward the nation’s most populous and diverse state.

Trump spoke for about 30 minutes in a basement banquet hall in this town just outside San Francisco airport. It was the sort of small-scale interaction with party activists and donors that he has generally eschewed for grander rallies. Trump came to make his pitch as the nominating calendar moves toward its end-game in California, which with 172 delegates at stake on June 7 could decide the GOP presidential nomination.

The billionaire front-runner told Republicans they needed to come together after their divisive primary but but also delivered a warning. “There has to be unity in our party,” Trump said. “Would I win–can I win–without it? I think so, to be honest with you, because they’re going to be voting for me”–and not the party, he added.

Trump supporters snapped up tickets to the luncheon and cheered heartily for their candidate from a ring of tables around the perimeter of the ballroom. But Trump’s speech got an icier reception from the party veterans and donors who sat just beneath the stage, separated from the rest of the room by a rope.

Kasich spoke to the convention Friday evening, and Sen Ted Cruz and his new vice presidential pick Carly Fiorina, address it on Saturday. All three candidates are looking to galvanize supporters, sway undecided party members or poach from rival campaigns at the convention. “It’s going to be a free-for-all,” predicted the state party vice chairman, Harmeet Dhillon.

That label clearly applied to Trump’s Orange County rally Thursday night, which filled the Pacific Amphitheatre to its capacity of about 8,000, with many hundreds more turned away.

Protests that stayed mostly peaceful during the event grew in size and anger afterward. Police in riot gear and on horseback pushed the crowd back and away from the arena; one Trump supporter had his face bloodied in a scuffle as he tried to drive away. One man jumped on a police car, leaving its front and rear windows smashed and the top dented, and other protesters sprayed graffiti on a police car and the venue’s marquee.

About 20 people were arrested, said the Orange County Sheriff’s Department.

On Friday, hundreds of demonstrators pushed to the front doors of the Hyatt Regency in Burlingame before being moved back by police in riot gear. Some protesters infiltrated the hotel building and hung a giant banner reading, “Stop Hate.” The Secret Service led Trump in through a rear entrance to the hotel. Trump joked that as he crawled under a fence to get in he “felt like I was crossing the border.”

Hours later, Kasich framed the chaos as a warning sign to his party. “Did you see what happened today?” he said during a news conference. “People chaining themselves to a fence. Do you see what’s happening?”

Trump’s remaining rivals can’t beat him in what’s left of the primary season. Their only hope is to deny him a majority of delegates heading into the July convention and wrestle for the prize in multiple ballots there.

But questions persist in the party—nationally and in California—about Trump’s electability in the fall and his conservative credentials. The demonstrations showed how polarizing Trump can be, especially in a state where Republicans have become marginalized because they failed to attract growing immigrant populations. Trump’s viewed warily by two camps here — those that want to grow the party and those who view some of Trump’s positions betrayals of the conservative movement.

The convention crowd defies expectation in a state known as a Democratic fortress. There have been pushes toward moderation, but the group tends toward conservative leanings and favors calls for free markets, tax cuts and shrinking the size of government. It’s also socially conservative: The state party’s platform defines marriage as between a man and a woman, and wants the Supreme Court’s affirmation of abortion rights reversed.

Trump has spoken favorably about Planned Parenthood, which provides abortion services. He has warned against cutting Medicare, Medicaid and Social Security, often targets for conservatives who want to slow government spending. While he will likely spend much of the next month in the state, he’s unlikely to be back during the general election, when California would return to its reliably Democratic status.

Still, Trump was a popular draw at a brief VIP reception where he posed for pictures with party stalwarts. He later joked about having mud and dirt smeared all over him from his unorthodox entrance during the photo session, and many in the banquet hall laughed heartily.

Henri Houdre was thrilled to see Trump live. “We see him as that alpha kid in high school with the leather jacket and slicked-back hair who everybody wants to be,” said Houdre, an 18-year-old college student from San Francisco.

Trump’s call to unity resonated with some. “That’s the thing every Republican needs to keep in mind, that we’re the same team,” said Kevin Krick, the Bay Area regional vice chairman for the party.

Kersti Buchanan, 70, a retired translator and party activist from Mendocino County who backs Kasich, was shocked at all of Trump’s supporters — and by the candidate’s speech itself.

“He’s probably the most narcissistic person I’ve ever listened to,” Buchanan said. “It was fairly shocking to see this many people who are eating it all up.”