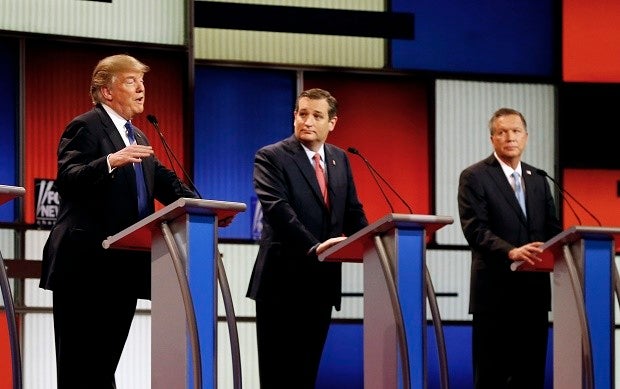 LOS ANGELES — California’s Republican Party convention will be an early test for Donald Trump, Ted Cruz and John Kasich in a state whose June election could hold the decisive delegates in the fight for the party’s presidential nomination.

Trump, who has seized front-runner status as a political outsider, will be speaking Friday outside San Francisco to hundreds of longtime GOP insiders — the activists, grassroots organizers and elected officials who make up the core of the state party. Kasich also speaks Friday, while Cruz and his choice for running mate, Carly Fiorina, speak Saturday.

The reception Trump in particular receives will be noteworthy: the billionaire businessman known for his boisterous public rallies rarely speaks to Republican establishment groups, and has railed against what he calls a rigged party system that governs the nomination.

He arrives in California after a sweep of Tuesday’s primaries, but has also faced questions about his electability in November and his conservative bona fides.

The behind-the-scenes cajoling could be as important as the speeches. The candidates and their allies are seeking to galvanize supporters, sway undecided party members or poach from rival campaigns.

The tableau will be remarkable for a state whose end-of-the-line primary on June 7 has often been ignored, coming far after the nominations were locked up.

But this year it’s possible that California, home to the largest trove of delegates, could provide the margin to anoint nominees in both major parties.

The convention crowd defies expectation in a state known as a Democratic fortress. There have been pushes toward moderation, but the group tends toward conservative leanings and favors calls for a strong national defense, free markets, tax cuts and shrinking the size of government. It’s also socially conservative: the state party’s platform defines marriage as between one man and one woman, and wants Roe v. Wade reversed.

Trump opposes abortion but has spoken favorably about Planned Parenthood. He has warned against cutting into Medicare, Medicaid and Social Security, often targets for conservatives who want to slow government spending. When Trump earlier this month said transgender people should be able to use whichever bathroom they choose, Cruz’s campaign released a statement saying Trump was “no different from politically correct leftist elites.” The California platform endorses free markets; Trump has long criticized U.S. trade policy and advocated steep tariffs on Chinese goods.

How Trump fares this weekend could be an indicator of his fortunes on June 7. The event marks an unofficial kick-off for the California race, which will award 172 delegates — a rich trove in the race for the 1,237 required to clinch the GOP presidential nomination. Currently, Trump has 994 delegates, Cruz has 566 and Kasich has 153, according to the AP’s delegate count.

The contest in the nation’s most populous state — Los Angeles County alone has more people than Michigan — is vastly complicated, playing out in what amounts to 54 separate races on a single day — one in every congressional district and one statewide.

The winner in each district collects three delegates; then, the candidate who gets the largest number of votes statewide claims a bonus of 10 more, plus the state party chairman and Republican National Committee members for a total bonus of 13.

An independent Field Poll released earlier this month found Trump with a 7-point edge over Cruz, 39 percent to 32 percent, with Kasich trailing at 18 percent and the rest undecided.

“Donald Trump is not going to agree with every member of this audience on every issue but he remains the rock star of this presidential race,” said Thad Kousser, who teaches political science at the University of California, San Diego.

But inside the California GOP, Cruz has something of a home field advantage. He’s been organizing in the state since last summer, and is supported for four former state party chairmen, along with a host of elected officials and activists.

With Cruz’s organizational roots in the state, a challenge for Trump will be breaking into the party establishment to line up as many supporters as possible in congressional districts he needs to win in June.

Kasich, the holder of one primary victory, his home state of Ohio, is looking to make inroads in California districts that could be favorable to his more moderate credentials and bolster his bid to stay in the race.