“We have forged an alliance to support each other and after the elections,” Duterte told reporters after a luncheon meeting with Remulla in Pasay City.

Duterte, however, clarified he and Remulla did not enter into any promise.

(We made no promises, it was enough for us male politicians to enter into an agreement just by shaking our hands and with just the words “let’s join forces.”)

INQUIRER.net witnessed the closed-door meeting between the two parties when Remulla expressed his support for Duterte.

“Kasama niyo ko sa pagkakampanya niyo (I will be with you in your campaign),” said Remulla.

Duterte then responded saying “For a better Philippines. And you will not regret it.” 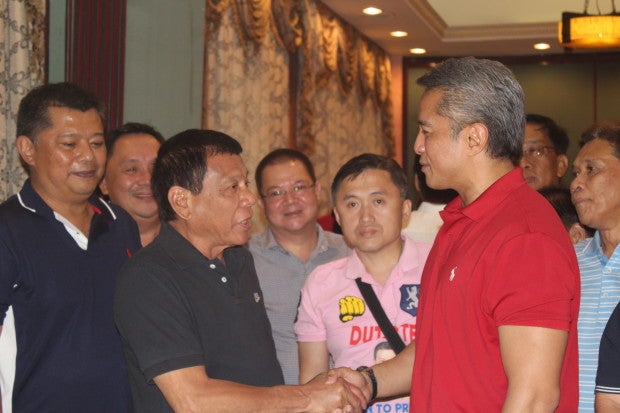 The two then shook hands.

“I am sure we can always work together. Maasahan niyo ako.  Basta sa performance of duty wala kayong problema. Sabihin ko, lalo na sa peace and order wala kayong problema sa akin (You can count on me. If it concerns performance of duty, you will have no problem. When it comes to peace and order, you will have no problem with me),” he said.

He told the officials that Filipinos are already fed up with the government which he said has done nothing for the people.

(Just work with me…you know what the people want, the way people are receiving me is not because I am I—they did not even know me before the campaign started—but because they are upset with the government.)

He said the people have noted the deterioration of the government’s social services.

(When the people see me and scream my name, it’s not about me. It’s about their being fed up with the government’s lack of action. The government’s social aspect has deteriorated.)

He said the country’s problem with drugs and criminality has become a national security threat.

(I will tell the Congress, the Ombudsman, the (Commission) of Human Rights not to block me because this is a serious matter that affects national security. I don’t want you impeding, obstructing or impeding me, but if you want to, then it’s up to you.)

He said that if he wins the presidency, he could issue even up to a thousand pardons a day.

With accuser Senator Antonio Trillanes publicly stating that he will use Duterte’s alleged hidden wealth to have him impeached if he wins the presidency, the mayor said in jest that Congress could impeach him at the last month of his term.

(If Congress asks me, I will tell them not to get in the way, to impeach me on my last month as president. I will not oppose them.)

If elected president, he said everyone would get a fair share of government resources.

(My financers have helped me in legal and proper ways. We are all in this together. I mean, I would really be fair in the distribution of resources. Everyone will have his equal share.)

After the meeting, Remulla did not grant any media interview to confirm their alliance.

Cavite is the province with the second highest number of votes in the Philippines with 1.84 million registered voters according to the Commission on Elections.

In an interview in Pangasinan prior to the final presidential debate last weekend, Binay said that he and Remulla remained “best friends” despite speculation that the latter had already shifted allegiance.

Oops! Binay misses out Remulla in his ‘Cabinet’