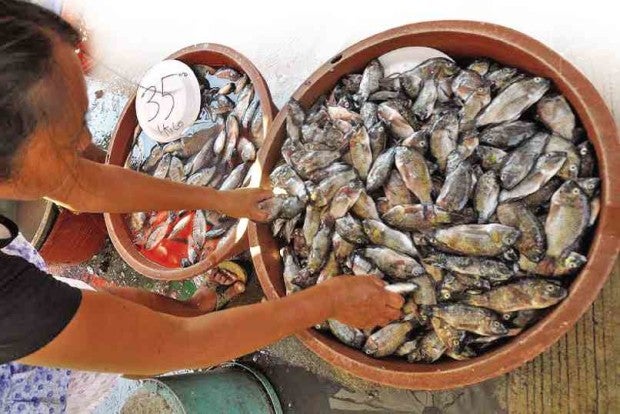 DAGUPAN CITY—A species of tilapia named after former President Gloria Macapagal-Arroyo for being a smaller version of the ordinary tilapia is invading fishponds in Pangasinan province, prompting bangus (milkfish) growers to complain of losses.

The species, known as tilapiang “Gloria” and also “molmol” locally, is depriving bangus of food in the ponds, according to Julie Perez, head of Malimgas-Aliguas Dagupan Vendors Federation, a group which includes bangus growers.

“Many of us operators are losing,” said Perez, also village chair of Pantal, one of this city’s bangus-producing areas.

She said while the ponds fill with the small tilapia, growers do not profit from these as they sell for only up to P20 per kilogram. Bangus, which Gloria is beating to the race for food, sells for up to P110 per kg.

Perez said her caretakers first noticed Gloria, named after the former President who is barely 5 feet in height, in her ponds early last year. These were also found in ponds in neighboring Binmaley town, also a leading bangus producer.

This city, which supplies what it claims to be the tastiest and juiciest bangus, has more than 900 hectares of ponds that produce at least 5 metric tons of bangus daily.

This species of tilapia grows to a maximum size of 10.2 centimeters and weighs 50 grams. “They can travel across the sea and they multiply fast,” said Rosario.

Growers have tried using chemicals to poison the fish but it continues to thrive, he said.

Rosario suggested stocking ponds with sea bass to control the population of Gloria. Sea bass, said Rosario, is the natural predator of Gloria.

To prevent Gloria from multiplying, bangus growers should dry the pond bottom, he said.

If drying the pond is not feasible, its gate must be fitted with fine mesh net, said Rosario. The flow of water should be impeded with either wooden boards or mud, he said.

Prices are an indication of a healthy industry, she said. Bangus, she added, could still fetch prices of up to P115 per kg.

According to Molina, El Niño has had little effect on the bangus industry because most ponds are near Lingayen Gulf, which produces “natural high tide and low tide that benefit our operators.”

Gulf water has replenished the ponds, after the city’s rivers have been cleared of fish pens and other structures.

In the Bangus Festival’s street party on April 30, the 25,000 pieces of bangus that would be grilled will come from the city’s ponds, Molina said. Gabriel Cardinoza, Inquirer Northern Luzon