Duterte mulls raps vs Trillanes over allegations on SALN 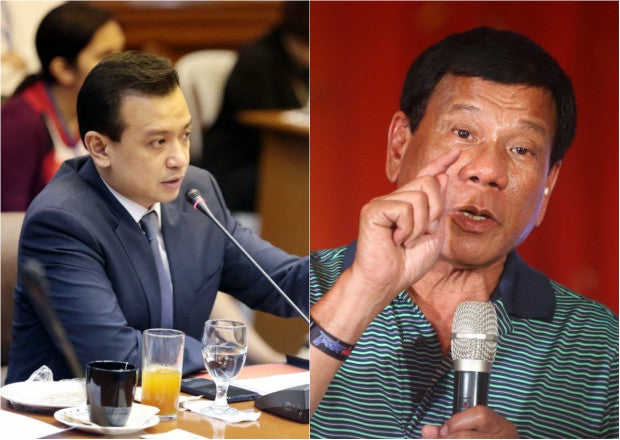 Leading presidential candidate Rodrigo Duterte is considering filing charges against Sen. Antonio Trillanes IV for his claims that the tough-talking Davao City mayor did not declare  P211 million in his statement of assets, liabilities and net worth (SALN).

In a statement to the media on Thursday, Peter Laviña, Duterte’s spokesperson, said the mayor’s legal experts are looking into  possible cases that can be filed against Trillanes.

Duterte signed a waiver in March that would allow for the opening of bank accounts for public scrutiny. But the mayor backtracked from his earlier pronouncement.

“Not anymore. I’ll make it difficult for Trillanes. It’s just a piece of paper. You prove it. Why will I give it to him?  I’ll take the waiver and I will tell him, ‘Prove it. I will not make it easy for you. I will not play into your hands. You prove it,’” Duterte told reporters in a mix of Filipino and English in an ambush interview on the sidelines of the Presidential Dialogue with the Makati Business Club on Wednesday.

Trillanes said Duterte had at least P211 million in an account at a bank branch in Metro Manila in 2014. The senator said the mayor did not declare the P211 million in his SALN.

During his speech before business leaders, Duterte described Trillanes as a “dangerous man,” citing the senator’s allegations as “fabricated.”

“Maniwala kayo (Believe me). That’s garbage. You can check with the bank. You go there,” said Duterte.

The mayor earlier called Trillanes an “idiot” after the senator claimed that Duterte had told him how he killed people kneeling before him.

“I told you, he is a liar. He fabricated this,” Duterte said.

READ: Duterte on Trillanes: ‘Be careful with that idiot’

He said Trillanes was paid to attack him after he took a wide lead in recent presidential surveys.

“This is election. End game na eh,” he said. CDG/rga