A fabrication, says Duterte who will not issue waiver 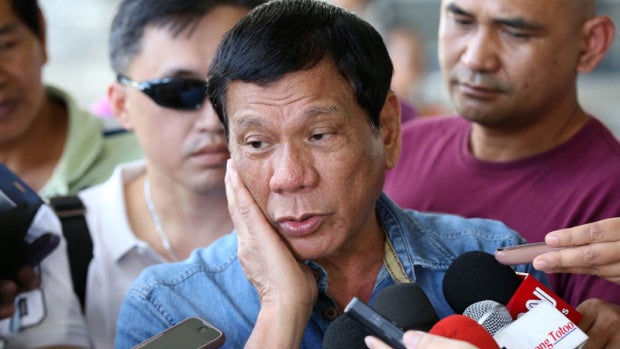 DAVAO City Mayor Rodrigo Duterte on Tuesday denied the existence of a Bank of Philippine Islands (BPI) account allegedly in his name that contained P211 million.

“The account is not true and is just a fabrication of [Sen. Antonio Trillanes IV], who is a money for hire,” the presidential candidate told the Inquirer.

Duterte said he would not issue a waiver for the specific account.

“I will not play into their hands by issuing a waiver. The account is nonexistent,” Duterte said.

The mayor, however, confirmed that he had an apartment on P. Guevarra Street in San Juan City.

The spokesperson of Duterte said documents purportedly showing that the mayor had P211 million in a bank account were fabricated.

“Sorry, we cannot comment until we see it, but now I can tell you it’s a lie, a fabrication and black propaganda. Documents can be fabricated,” Pete Laviña earlier told the Inquirer when asked to comment on the alleged millions that was not reported in Duterte’s statement of assets, liabilities and net worth (SALN) for 2014.

“We also urge them to come out and prove that the bank accounts were his,” Laviña added.

He said the timing of the release of the information was suspicious.

“They are trying to throw everything at him, like some pornographic photos and now the supposed secret accounts not in SALN,” he said. “If it’s 2014, why only now?”

Laviña said Duterte was pulling away from his rivals in the presidential race because people were fed up with “trapo” (traditional politicians) and character assassination.

“We have been saying from the beginning, the more they hit him, the more people love him,” Laviña said.

Contamination not found in 48 COVID testing by Red Cross – RITM