Filipinos should be ‘alarmed’ by photo of Duterte with NPA 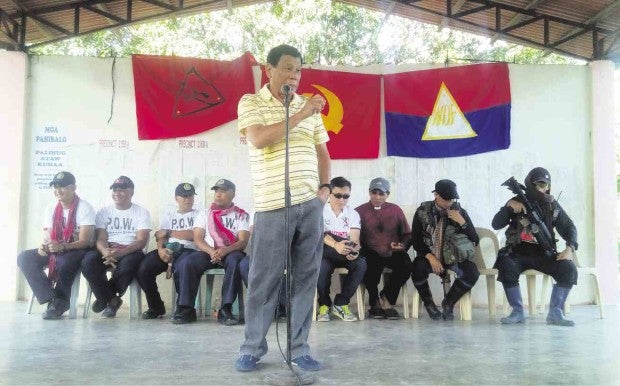 DUTERTE CONNECTION Five police officers captured by the New People’s Army are turned over to presidential candidate and Davao City Mayor Rodrigo Duterte during ceremonies in a rebel-influenced village in the city’s Paquibato District. Seated at right are two NPA members. (Related story in Across the Nation, Page A18.) BARRY OHAYLAN/CONTRIBUTOR

Malacañang on Wednesday did not mince words when asked about the published photo showing presidential candidate Davao City Mayor Rodrigo Duterte with members of the New People’s Army (NPA).

“Freedom-loving citizens would find sufficient cause to be alarmed at the picture published in a major broadsheet (Philippine Daily Inquirer, 27 April), where erstwhile captive PNP (Philippine National Police) officers are shown wearing shirts with POW (Prisoner of War) printed thereon and being paraded by heavily armed NPA members in the company of Mayor Duterte, with the CPP (Communist Party of the Philippines), NPA and the NDF (National Democratic Front) flags prominently displayed in the background,” Communications Secretary Herminio Coloma Jr. said in a statement.

“This picture should lead us to think seriously and be concerned if this is the future for the Philippines which presidential candidate Duterte is offering to our people,” he said.

The said photo was published by Inquirer with a story on the NPA’s release of a soldier and five policemen in Mindanao.

Duterte claimed that he talked with the NPA, the armed wing of the CPP and told them that there should be no conflict during election season because “the voting public will be affected.”

“Don’t harass the policemen because they are responsible for all the investigation, crime prevention and other law enforcement operations,” he supposedly said.

Duterte, the frontrunner in electoral surveys, is known for having a good relationship with the NPA.

However, CPP founder Jose Maria “Joma” Sison told the Inquirer last December that Duterte has also flip-flopped in his stated support for the NPA.

“He said that when he becomes President, the NPA will have one foot in Malacañang … But he has also said that he wants the NPA to be disarmed, otherwise they will have to fight,” said Sison, who refused to name his preferred presidential candidate.

Sison, now chief political consultant of the CPP’s NDF, said the revolutionary organization, which is against the ruling system, cannot support any candidate. RAM