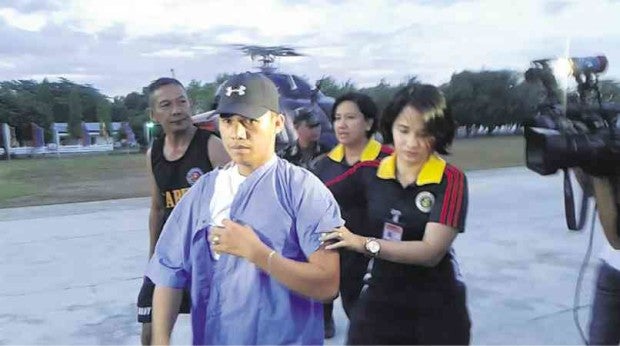 DAVAO CITY—Communist rebels released an Army soldier after almost a week of captivity in Tulunan, North Cotabato province, on Tuesday afternoon, a day after their comrades from another unit freed five policemen in a hinterland village here.

Pfc. Edgardo Hilaga of the 7th Infantry Battalion based in Mlang town in North Cotabato, was taken by New People’s Army (NPA) rebels in Sitio Balawan, Barangay Malasila, in Makilala town, also in the province, on April 21.

Hilaga was fetched by Mayor Rodrigo Duterte, a front-runner in the presidential race in next month’s elections, on a privately owned helicopter that flew from Davao City to North Cotabato.

Upon his return to the Eastern Mindanao Command headquarters here for Hilaga’s formal turnover to his superiors, Duterte told reporters that he had talked with the NPA rebels to remind them that it was election time and that there should be no conflict.

“Let us not cause trouble because the voting public will be affected,” he recalled his remarks to the rebels.

Police said the soldier was riding on a motorcycle in the village when he was stopped at an NPA checkpoint. A signage that read “Stop Army 39th IB 1002nd Inf. Bde” was purportedly posted by the rebels.

Duterte said he had negotiated for the release of the policemen before he went to Manila to participate in Sunday’s third and final presidential debate in Dagupan City in Pangasinan province. He returned to Davao City for the formal turnover of the lawmen.

Monday was supposed to be the mayor’s rest day after a string of campaign rallies before the last debate.

When he met the rebels, Duterte claimed that he castigated them for taking the policemen. “Don’t harass the policemen because they are responsible for all the investigation, crime prevention and other law enforcement operations,” he supposedly told the rebels.

The policemen were on their way to look into reports of an NPA attack on a militia detachment in Barangay Salapawan in Paquibato on April 16.

The offensive was considered rare since Duterte is known to have good relationships with the communists and Moro armed groups. The politician has been instrumental in the releases of many NPA captives in other provinces in Mindanao.

Duterte promised the freed officers an all-expense-paid vacation to Hong Kong, along with their families, after the May 9 elections.

To critics who called him a “puppet” of the NPA, the mayor said, “I’ve been a public official for 23 years, my loyalty belongs to the Republic of the Philippines.”

The communist-led National Democratic Front said the five were freed due to humanitarian considerations.

Tarongoy’s wife, Divine, thanked Duterte for the release of her husband. She expressed gratitude for the assistance extended by the religious group Exodus for Justice and Peace, which facilitated the early turnover of the captives.