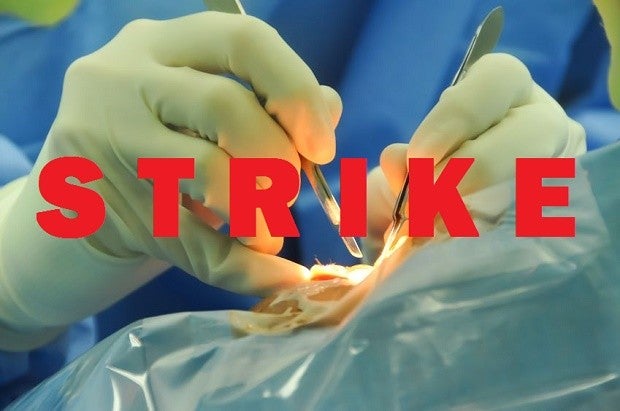 The English National Health Service said 13,000 operations were suspended after junior doctors went on an all-out strike over pay and work conditions. INQUIRER.NET

The strike forced the state-funded National Health Service to postpone 13,000 operations and 113,000 appointments as thousands of doctors took action.

Protesters marched through the streets holding placards like “Save our NHS” and “Protect Junior Doctors” and were joined by Labor opposition leader Jeremy Corbyn.

Addressing a large crowd of junior doctors massed on the pavement opposite Downing Street, Corbyn described the NHS as the “greatest achievement in this country”.

“It’s under threat from a government that’s more interested in attacking the core of the NHS – namely the junior doctors and all that work with them – than supporting the NHS and people that keep us all alive,” Corbyn said.

While there have been several recent walk-outs, this one affected hospital emergency care such as accident and emergency (A&E) and maternity units for the first time, although senior doctors and nurses were to remain on duty.

England has around 50,000 junior doctors, who are graduates with years of experience who have yet to complete their professional qualifications.

“This is the saddest day of my professional life,” said Fiona Martin, 36, at a picket outside St Thomas’ Hospital in central London, in the shadow of parliament.

“I never thought as a doctor I would be forced to put down my stethoscope but we have been forced into it by a government that refuses to listen,” she told AFP.

A key sticking point in the dispute has been how much financial compensation junior doctors should get for working on Saturdays.

The government has proposed treating most of Saturday like a weekday, cutting down on overtime pay.

The British Medical Association (BMA), the doctors’ trade union, has not ruled out an open-ended strike or mass resignations as a way of trying to force the government’s hand on the issue.

“We have too many heartbreaking stories, parents who have lost children, people who have lost loved ones, because we are not delivering high-quality care at the weekend,” Hunt said.

The taxpayer-funded NHS, established in 1948, is one of Britain’s most respected institutions, providing largely free medical care.

While it has been shielded from austerity cuts to public services under Cameron, experts warn it still faces increasing financial strain due to factors like rising treatment costs and an ageing population.

Cameron’s government argues that reforms to junior doctors’ contracts are necessary to ensure that the quality of care for patients is as high at weekends as it is during the week.

The prime minister has quoted research claiming mortality rates for patients admitted to hospital on a Sunday can be 16 percent higher than on a Wednesday, though doctors question this.

An Ipsos Mori poll for BBC News found that 57 percent of the general public supported the doctors while a quarter opposed their actions.

Hunt announced in February that he intended to impose the new contract on junior doctors after they rejected his “best and final offer”.

There are signs the dispute is getting more entrenched.

“Both sides seem to be digging in their heels,” warned Katherine Murphy, chief executive of the Patients Association.

Read Next
Onlookers marvel at size, stench of dead whale in California
EDITORS' PICK
Over 3 Million worth of prizes to be won at Smart Padala’s SENDali Manalo Promo!
Gear up and get ready to play with Yamaha Mio Gear
Acer starts the year off strong with the Aspire Vero National Geographic Edition
If elected VP, Sara Duterte will push for mandatory military service for all Filipinos
Senate bill seeks to penalize employers requiring employees to work during rest hours
Marcos-era elections: Not what his son signed up for
MOST READ
‘Sampal sa gobyerno:’ Drilon wants unvaxxed PAO chief barred from working
Vice mayor slams Vico Sotto for turning Pasig into a ‘puro palabas’ city
Bongbong-Sara tandem names 7 candidates in initial senatorial slate
Jose Manalo’s son Benj pays tribute to late mother: ‘You’re a testimony of God’s love’
Don't miss out on the latest news and information.