Palace: We trust our ‘Bosses’ will vote for continuity | Inquirer News

Palace: We trust our ‘Bosses’ will vote for continuity 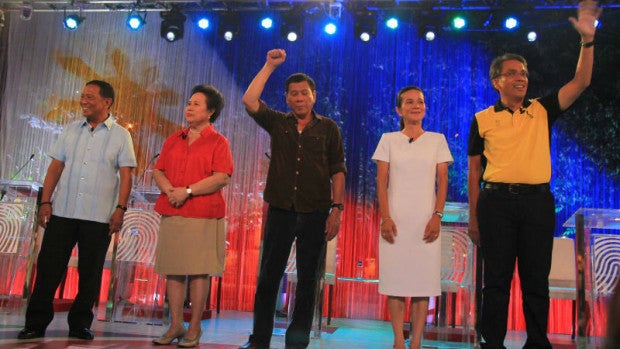 Five candidates, one stage, one elections for the future of 100 million Filipinos.
Photo by Inquirer Volunteer Gail Mejia | University of Pangasinan

WITH administration candidate Mar Roxas still trailing in preference polls less than two weeks before the May presidential election, Malacañang on Tuesday said it was hoping that Filipinos will “manifest their desire” for continuity of the government’s achievements under the leadership of President Benigno Aquino III.

“When asked about results of public opinion surveys on voters’ preferences in Lipa City last 21 April, President Aquino stressed that the most important survey will be held on Election Day, May 9,” Communications Secretary Herminio Coloma said in a statement.

“We trust that our Bosses will manifest their desire for the continuity of the gains achieved under the good governance platform,” he added.

Coloma was reacting to the latest Pulse Asia “Pulso ng Bayan” survey where frontrunner Davao City Mayor Rodrigo Duterte (35 percent) was able to widen his lead over closest rival Sen. Grace Poe (23 percent) despite a controversial joke about the rape-slay of an Australian missionary.

Roxas, standard-bearer of the ruling Liberal Party, was statistically tied in third place with Vice President Jejomar Binay, with 17 and 16 percent, respectively.

Duterte also secured his frontrunner status in the latest Social Weather Stations (SWS) survey with 33 percent preference rating. Roxas ranked third and improved his number by one percentage point from 18 to 19 percent.

Sen. Ferdinand “Bongbong” Marcos Jr. was still the man to beat in the vice presidential race, according to the Pulse Asia poll, with 29 percent of voter preference. LP candidate Leni Robredo came in second with 24 percent. The Camarines Sur Representative jumped seven points in SWS (26 percent), sharing a virtual tie with the son and namesake of the late dictator (25 percent).