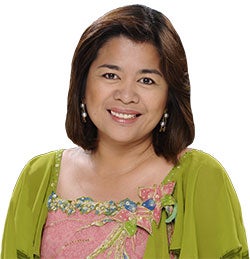 (Updated) The Sandiganbayan First Division on Tuesday ordered the issuance of a warrant of arrest and issued a hold departure order against North Cotabato Governor Emmylou Taliño-Mendoza over an anomalous procurement of fuel from a gasoline station owned by her mother.

“After perusing the information and evaluating the resolution of the prosecutor, the evidence in support thereof and the records of the preliminary investigation attached, the Court finds that sufficient grounds exist for the finding of probable cause for the purpose of issuing a warrant of arrest against the accused charged in the instant cases,” the resolution read.

The first division directed the Bureau of Immigration to bar Mendoza from leaving the country “except upon prior approval from this court” for violation of Section 3 (e) of R.A. No. 3019 or the Anti-Graft and Corrupt Practices Act.

The Ombudsman indicted Mendoza on three counts of graft for the release of P2.4 million from provincial funds to pay for 49,526.72 liters of fuel used for one road grader and four dump trucks utilized during the two-day road rehabilitation projects.