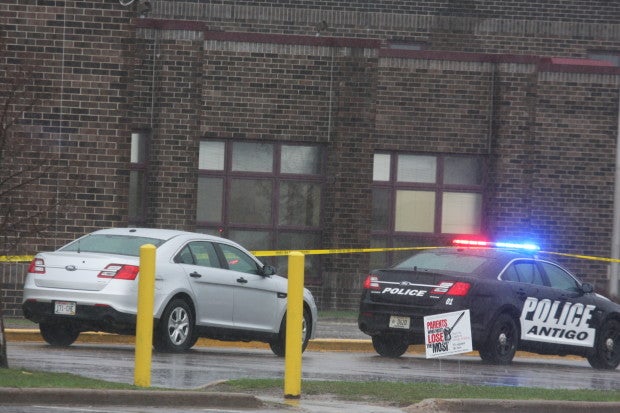 Two Antigo police department vehicles sit in front of the entrance to Antigo High School, Sunday, April 24, 2016, where an 18-year-old gunman opened fire late Saturday outside of a prom at the school. The shooter wounded two students before a police officer who was in the parking lot fatally shot him, authorities said Sunday. FRED BERNER/ANTIGO DAILY JOURNAL/AP

ANTIGO, Wisconsin, United States — Wisconsin Gov. Scott Walker on Monday called for a discussion on how to deal with bullying in schools after friends of a gunman who wounded two people outside a high school prom said the 18-year-old had been bullied.

Authorities have not revealed a motive for the shooting outside Antigo High School in northern Wisconsin and declined to comment Monday on whether bullying may have been a factor.

“If anything, I hope it shines light on bullying and how deeply it affects people,” she said, before ending the interview.

Former classmate Dakotta Mills, who said he had known Wagner since sixth grade, told The Associated Press that he had “some rough spots now and then” and that he had witnessed him being bullied. Another former classmate, Emily Fisher, told the Wausau Daily Herald that students ganged up on Wagner and called him names, in part because of poor hygiene. The bullying started in middle school, Fisher said, and continued through high school.

Walker, a Republican, said authorities should address bullying and mental health, as well as teaching students how to resolve disagreements peacefully rather than impose new limits on firearms. He said that if there were a ban on rifles in Wisconsin, “you wouldn’t have hunting here.”

At a news conference Monday, authorities said they couldn’t confirm that Wagner had been taunted by fellow students or say whether it was a possible motive in the shooting.

“I can’t get into the specifics on that,” Antioch Police Chief Eric Roller. He added, “That’s still part of the investigation.”

However, Roller said it didn’t appear that the victims had been specifically targeted.

The state Department of Justice has taken over the case because it involves a police shooting. Agency spokesman Johnny Koremenos said in an email that it was too early to offer a motive or provide other details of the investigation.

Roller said the officers’ response “saved lives by stopping the threat” in that the suspect “didn’t end up inside a building that was full of prom-goers.”

Wagner arrived on a bicycle armed with a rifle and opened fire as two couples were leaving the dance, Roller said. One 18-year-old male student was struck in the leg and a bullet grazed his date’s thigh. The other couple wasn’t struck. Two officers were stationed in front of the school and one quickly shot the gunman.

The couple who wasn’t shot helped the 18-year-old male victim by wrapping a necktie around his leg as a tourniquet to stanch the bleeding, Roller said.

The victim’s family requested privacy, but said in a statement that their son was doing well after a long surgery. They thanked everyone who helped and asked that people “pray for the family of Jakob Wagner.

“As much as we are struggling through this event, we cannot imagine the grief they are experiencing at this time,” the statement read.

Roller said no weapons were recovered aside from the rifle. He declined to describe the weapon further or say how many rounds of ammunition Wagner was carrying.

Zamzow, wearing a burgundy T-Shirt that read “Antioch Pride” in bold white letters, said that classes were back in session Monday and that attendance was normal. Counsellors were on campus to help students.

A school official told AP on Sunday that Wagner had not graduated as scheduled last May, but Principal Tom Zamzow said Monday that he was a graduate.