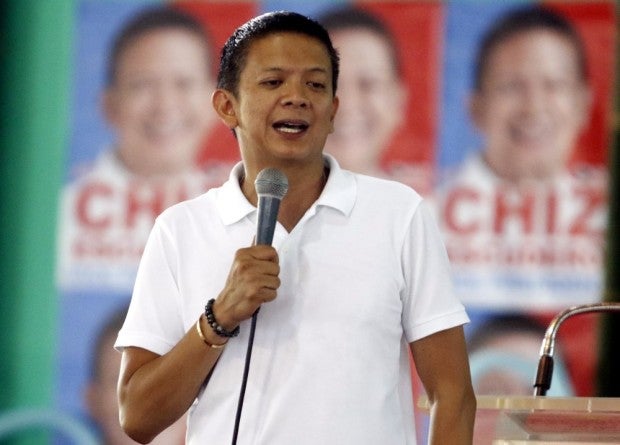 Vice presidential candidate Senator Francis “Chiz” Escudero remained unfazed by his drop in the latest surveys, saying the final survey would be the  national elections on May 9.

(I am confused over the published surveys because their results are different. We study the surveys and we look over them to see their impact and how we can improve our campaign. A campaign is a work in progress, any strategy or tactic is not engraved on stone.)

(Surveys are changing. Sometimes, the ratings are high, sometimes, low. These surveys are reversible. In the end, all the candidates will strive hard [in their campaign] because as they say, the last survey is the Election Day on May 9 where the actual votes would be counted.)

Asked if he was not surprised by Robredo’s surge in the surveys, Escudero reiterated that the numbers are always changing.

Robredo and Marcos tied for the top spot with 26 percent and 25 percent, respectively, based on the SWS presidential survey conducted from April 18 to 20, followed by Escudero with 18 percent, Senator Alan Cayetano with 16 percent, Senator Antonio Trillanes IV with five percent and Senator Greogorio “Gringo Honasan” II with two percent.

(There are two weeks left before  Election Day. Only a short time is left. As I said, the ratings in the survey are sometimes high, sometimes, low. Whoever is in the lead should not boast and whoever is in the lowest place should not be annoyed because it is just a snapshot of our countrymen’s view at a particular time and place where the survey was taken.)

“Lahat pinapaniwalaan namin at pinag-aaralan namin kaya lahat naman din mula’t mula, tinuring naming seryosong kalaban, wala kaming manaliit sa mga tumatakbo, ano man ang numero na binigay sa kanila ng survey (We believed in all the surveys and we studied them. That’s why from the start we have treated our opponents as serious rivals, we did not underestimate those who are running, whatever ratings the surveys have given them),” he added.

Given their “limited” resources, Escudero said he and Poe, both independent candidates, had no regrets at how they were running their campaign.

(There are no regrets and shortcomings on our part. We maximized whatever God gave us, such as resources, manpower and opportunities.)

Escudero dismissed speculation that they are the “secret candidates” of President  Aquino, who is campaigning for Robredo and the administration’s presidential bet, former Interior Secretary Manuel “Mar” Roxas II.

He also denied reports that Poe had met privately with the President supposedly to explore how they could “help each other” in the  election.

“Tinitiyak ko sa inyo, hindi po ako o kami ang plan B dahil wala naman po yatang plan B si Pangulong Aquino (I assure you that Poe and I are not considered plan B because I don’t think the President Aquino has such plan),” he added. RAM