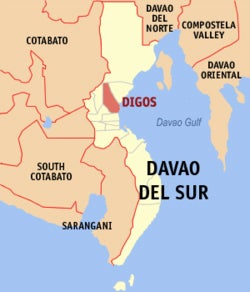 The Inquirer is coming out today with the 16th in its series on pressing people’s concerns that should be high on the agenda of candidates for representative, governor or mayor in the May 9 elections. The series should help voters in the provinces choose their leaders wisely. In line with our “ThINQ. Vote.” advocacy, we have asked candidates in certain provinces, cities and congressional districts to outline their concrete plans of action in dealing with specific issues in their areas.

Digos is a second class city and remains a component of Davao del Sur province. Its topography ranges from hilly to mountainous with agriculture and trading as major components  of its economy. It has 26 barangays, including the summer destination of Kapatagan at the foot of Mt. Apo. Being the capital of Davao del Sur, Digos City hosts a number of shopping malls and commercial centers and educational institutions such as the satellite campus of the state-run Southern Philippines Agri-Business and Marine and Aquatic School of Technology.

Motorcycle theft, robbery, drugs and street crime are among the concerns in the city. In 2013, Digos accounted for about a quarter of Davao del Sur’s 489 index crimes. It also holds the distinction of having three media men murdered in a span of nine years—broadcaster Racman Pace in 2006, Nestor Bedolido in 2010 and Sammy Oliverio in 2015.

In 2012, the National Statistical Coordination Board (now the Philippines Statistics Authority) reported that Digos City’s poverty incidence was 14.7 percent.

Read Next
LP members back Duterte
EDITORS' PICK
SSS: Members on home quarantine due to COVID-19 can apply for sickness benefit
Gear up and get ready to play with Yamaha Mio Gear
Mobile COVID-19 vaccination for commuters, transport workers set at PITX
Kalinga, Ifugao, Mt. Province, N. Samar will be under Alert Level 4 from Jan 21-31
PH to send 584 athletes, 161 officials to Vietnam SEA Games
Acer starts the year off strong with the Aspire Vero National Geographic Edition
MOST READ
Imelda Marcos trends on Twitter after octogenarian jailed for allegedly stealing mangoes
Mayor Vico counters vice mayor: ‘Did I say anything about his family?’
PH 51st on list of world’s most powerful militaries
‘Unbelievable!’ Pacquiao hits DA’s plan to import 60,000 MT of fish
Don't miss out on the latest news and information.