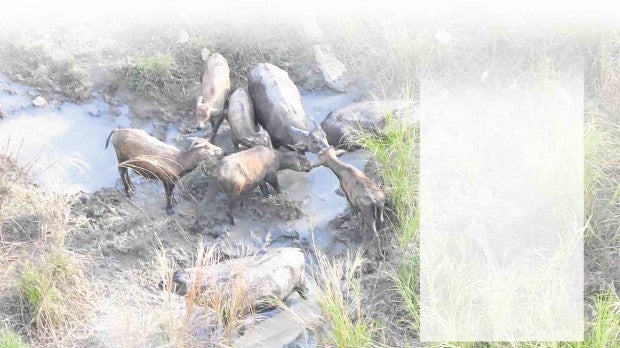 CITY OF CALAPAN—The increase may be only eight animals but this is enough to give environment officials and conservationists hope for the tamaraw, one of the Philippines’ most endangered species that is endemic to the island of Mindoro.

This week, the Department of Environment and Natural Resources (DENR) announced that the population of the tamaraw (Bubalus mindorensis) on Mount Iglit in Occidental Mindoro province had increased from 405 to 413.

He said 66 of the tamaraw documented this year were less than a year old, “a reflection that protection and conservation efforts are working.”

Boyles also attributed the population increase to stronger coordination between the military, police, barangay officials and the indigenous Mangyan in protecting the tamaraw.

DENR personnel, from April 12 to 19, finished data consolidation for the tamaraw population count, which has been done yearly in  the past 16 years to document the number of the dwarf buffalos in the wild.

Distinguished by its V-shaped horn and dark-brown skin, the tamaraw runs wild in the forests of Mindoro and weighs half as much as the common carabao used by farmers to plough rice fields.

The International Union for the Conservation of Nature classifies the tamaraw as “critically endangered,” a status two steps from extinction.

The DENR in Mimaropa (Mindoro, Marinduque, Romblon, Palawan), on its website, said the home of the tamaraw, the MIBNP, was once a game refuge and bird sanctuary, declared as such by Proclamation No. 557 in 1969. Its status as a national park was reiterated through Republic Act No. 6148, enacted in 1970.

MIBNP is in the central part of Mindoro, “the smallest among the five major centers of endemicity or the so-called faunal regions in the country,” the DENR said.

The park has an estimated area of 75,445 hectares in the two provinces on Mindoro island, with the larger portion in Occidental Mindoro.