Kris to supporters after chopper issue: Will you defend me? | Inquirer News

Kris to supporters after chopper issue: Will you defend me? 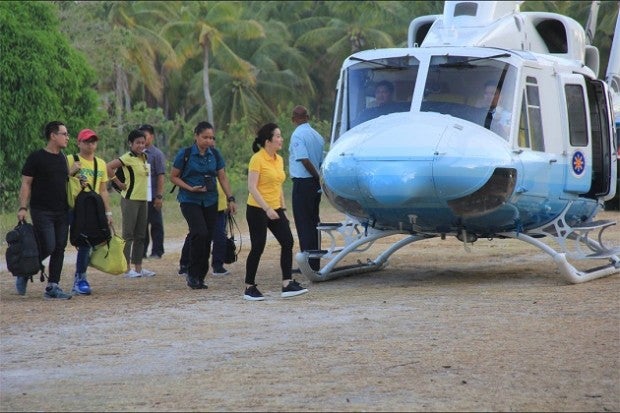 Will you defend me?

Television host and actress Kris Aquino asked Bulacan supporters of the Liberal Party to back her up after she received a slew of criticism on social media for using the presidential chopper on her way to Cebu province to campaign for LP standard-bearer Mar Roxas and running mate Leni Robredo.

(I am being pummeled in social media. They called the Aquino family abusive, that I am thick-skinned for using the presidential chopper for campaigning. Could you please defend me?)

The plea of the presidential sister, who was wearing yellow, the color of the administration party, drew cheers and applauses from the supporters.

The celebrity was heavily criticized after her photos alighting from the chopper last Tuesday went viral on social media, with netizens and militant groups calling her out for using government resources and taxpayers’ money for the campaign.

Despite being criticized, Aquino told the audience that she had to walk for three kilometers going to the campaign venue in Hagonoy. She said she did not want to keep the people waiting.

(Actually, I waited for an hour. The guards I came with were just dumbfounded when I told them, ‘Let’s just walk!’ Because it would be embarrassing to keep Hagonoy waiting.

I found out that my vice president, Leni Robredo, had already spoken so I said I can’t keep you waiting.)

But in spite of her tiredness, Aquino said she was willing to walk because the Aquino family was a hundred percent behind Roxas.

(I am catching my breath because I walked for three kilometers, but I did that because the Aquino family supports mar Roxas 100 percent!)

Malacañang defended President Benigno Aquino III’s younger sister and explained that members of the President’s immediate family are allowed to ride with him in official government vehicles. CDG