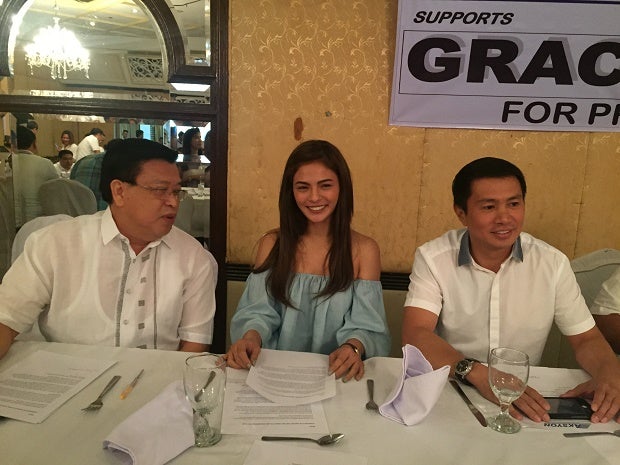 Senator Grace Poe’s presidential bid got another boost on Thursday with the endorsement from Aksyon Demokratiko and some members of its allied parties, like the Liberal Party (LP).

Aksyon Demokratiko is a political group founded by the late Senator Raul Roco.

The endorsement held at the historic Club Filipino was attended by its members led by its president Robbie Pierre Roco, and other members from allied groups such as the LP, the United Nationalist Alliance, Laban ng Demokratikong Pilipino and National Unity Party.

Party officials and members present during the event then read and signed a manifesto of support for Poe and her “Gobyernong May Puso (Government With a Heart).”

“With the elections on May 9, we shall all reset our national narrative. We will determine whether we shall take steps backwards to a regime of unabated corruption, fatal incompetence, or wanton denial of our civil liberties and freedoms and the rule of the law; or take the high road towards a direction of inclusive growth, peace, and sustainable progress,” they said in the manifesto.

“At this juncture of our collective journey, we firmly believe that a ‘gobyernong may puso’ under the competent and compassionate leadership of Grace Poe will catapult us to the right direction. Walang Maiiwan (No one will be left behind)!”

Poe, the manifesto said, represents a leadership that has heart for the vulnerable, oppressed and marginalized.

“She is quick to act. She is independent and fair. She is committed to transparency. She respects due processes and the rule of law. She represents a balance between a continuity of programs that work and that of change from inefficient and callous governance.”

“She does not present herself as savior but as an empowering leader, who will motivate all of us into meaningful action and nation-building,” it further said.

Poe’s supporters also urged the public not to choose a leader who is “divisive loose cannon, thief, human rights violator, or incompetent.”

“We commit to her platform of governance where no one is left behind. We will strive to ensure her victory this May. Her victory is victory for the Filipino people,” the manifesto added.

Poe was not present to receive the manifesto as she was campaigning in Bacolod and Palawan provinces.

It was her half-sister, actress Lovi Poe, who came and received the manifesto from the local officials. RAM

Who to endorse: NP leaning towards Poe