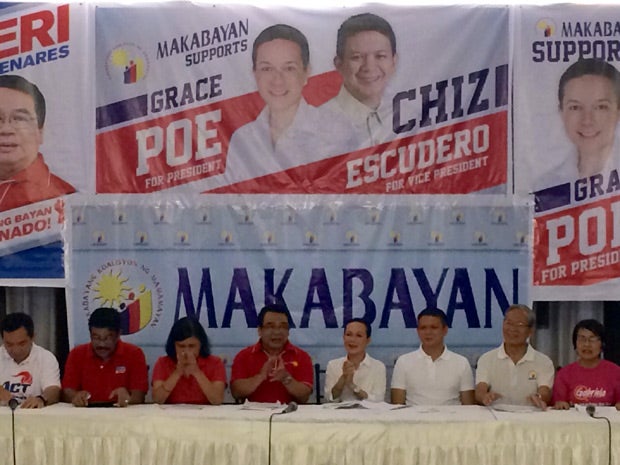 The presidential and vice presidential bids of Senators Grace Poe and Francis “Chiz” Escudero in the 2016 elections got another boost from the Makabayan bloc, a progressive coalition, which officially endorsed them on Thursday.

(We are pleased to declare on this day the Makabayan’s endorsement of the candidacies of Grace Poe for President and Chiz Escudero for Vice President of the Philippines.)

(Commitment to the platform of establishing significant socio-economic and political reforms; good records as public servants; open-mindedness in cooperating with progressive forces. These are the main reasons for Makabayan’s endorsement of the candidacies of Grace and Chiz.)

Furthermore, Makabayan said that Poe and Escudero expressed their commitments to at least nine programs of government that the group said would beneficial to the masses and the country.

Among their commitments, the bloc said, is to address the problems of farmers and fishermen; provide jobs, raise the salaries of teachers and nurses, reduce the income tax, raise the SSS (Social Security System) pension; additional budget for public schools, hospitals, health centers and shelters; and protect human rights, continue the peace talks with the National Democratic Front and the Moro Islamic Liberation Front, protect the victims of calamities, establish a transparent government, among others.

(More than legal terms, Poe’s platform on a number of issues of the poor and the country has the Philippine side compared with the programs and records of President [Benigno] Aquino [III] and Mar Roxas which were pro-US and promoters of destructive globalization of the country.)

The group meanwhile pointed out its long-standing relationship with Escudero, which started when the latter was still the minority leader of the House of Representatives. Escudero was a three-term congressman before he was elected senator in 2007.

(We are witnesses of his ability, reliability and experience as a public servant and his standing up to a number of issues and demands of our fellow countrymen that the Makabayan stands up to.)

Aside from Makabayan, the other political group that endorsed the candidacies of the two senators was Aksyon Demokratiko of the late former Senator Raul Roco. RAM

Read Next
Comelec eyes faster transmission of election results
EDITORS' PICK
A delightful blessing!
Gov’t plans to open COVID-19 vaccination for 5- to 11-yr-olds by January 2022
Gov’t eyeing COVID-19 vaccine booster for essential workers, indigents by Dec. 10
Villar Group gears up for AllValue Shopping Party on Dec. 3; around P 1-million promos and discounts up for grabs
Omicron variant detected in more countries as scientists race to find answers
Legarda: Ending Violence Against Women, a cause for all
MOST READ
Omicron poses ‘very high’ global risk, countries must prepare–WHO
Quiboloy warns of ‘much worse than Omicron virus’ if his ‘persecution’ is not stopped
Bongbong Marcos’ conviction in tax case not a crime involving moral turpitude — lawyer
Marcoleta defends pol ads on ABS-CBN
Don't miss out on the latest news and information.