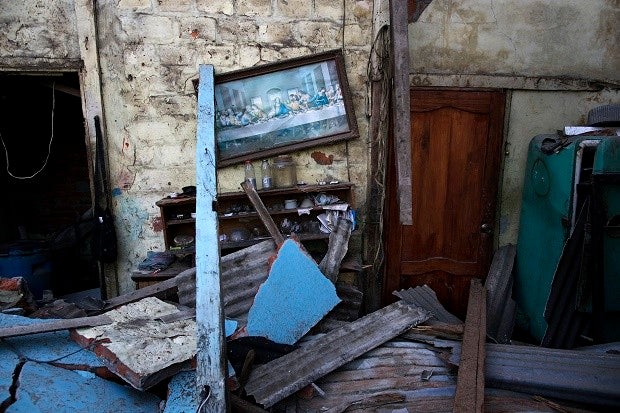 A framed print of The Last Supper hangs in the earthquake-damaged kitchen of Rene Macias, in Manta, Ecuador, Wednesday, April 20, 2016. Ecuadoreans began burying loved ones felled by the country’s deadliest earthquake in decades, while hopes faded that more survivors will be found. AP

MANTA, Ecuador — A magnitude-6.1 aftershock Wednesday set babies crying and sent nervous residents pouring into the streets, fearful of yet more damage following the deadly earthquake over the weekend.

The pre-dawn jolt was the strongest aftershock yet since Saturday’s magnitude-7.8 quake that killed more than 500 people. Some people in Portoviejo abandoned their homes, even those with no apparent damage, and headed to a former airport where temporary shelters have been set up.

The government said the number of known dead stood at 553, but officials expected more bodies to be found. About 7,000 were injured. At least 11 foreigners were among the dead, including two Canadians and three Cuban doctors who had been on a medical mission to Ecuador.

The final toll could surpass casualties from earthquakes in Chile and Peru in the past decade.

Among the survivors, the situation was growing increasingly tense. While humanitarian aid has been pouring in from around the world, distribution is slow. In Manta on Wednesday, people waited for hours under the tropical sun for water and food supplies. Soldiers kept control with fenced barricades.

“They looted the store. I’m taking out what little remains,” Jose Encalada said as he cleaned up his paint store in Pedernales, one of the hardest-hit towns.

Reflecting some of the desperation, residents in Manta could be seen scavenging through the rubble, no longer looking for loved ones but trying to salvage metallic objects and other items of value.

Grief mounted as families buried loved ones, but people held out hope of finding some of 163 people the government said were still missing. Since Saturday, 54 people have been rescued from rubble alive.

Rescuers who have arrived from Mexico, Colombia, Spain and other nations said they would keep searching for survivors, but cautioned that time was running out and the likelihood of finding more people alive grew smaller with the passage of every hour.

As authorities begin to shift their attention to restoring electricity and clearing debris, the earth continued to move. Local seismologists have recorded more than 550 aftershocks, some felt 105 miles (170 kilometers) away in the capital of Quito.

Saturday’s earthquake destroyed or damaged about 1,500 buildings and left some 23,500 people homeless, the government said. It was the worst temblor in Ecuador since one in 1949 killed more than 5,000 people.

A helicopter flyover of the damage zone Wednesday showed the scale of the devastation, with entire city blocks in ruins as if they had been bombed.

Some 13 nations and 32,000 volunteers are involved in the relief effort. Cuba sent more health workers. Venezuela has flown in food and the U.S. government said it would send a team of disaster experts as well $100,000 in assistance.

President Rafael Correa has spent the past days overseeing relief efforts and delivering supplies. On Wednesday, he said he would soon announce economic measures to help rebuild. The quake caused $3 billion in damage, about 3 percent of gross domestic product, he said.

“This isn’t a problem of just three days, three weeks or three months,” Correa said. “It’s a problem that will take years.”

After a deadly earthquake in Chile in 2010, that South American country was able to get back on its feet quickly thanks to a commodities boom that was energizing its economy. But Ecuador must rebuild amid a deep recession that has forced austerity on the OPEC nation’s finances. Even before the quake, the International Monetary Fund was forecasting the oil-dependent economy would shrink 4.5 percent this year.