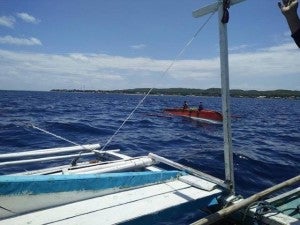 A father and his two children hang on to their capsized boat off Medellin town in Cebu province on April 20, 2016. CONTRIBUTED PHOTO by Niñachleo Dianne Saplad

CEBU CITY — Two children and their father were rescued about an hour after their small motorboat capsized past 11 a.m. on Wednesday, while they were bringing home 30 containers of water to Sitio Lipata, Gibitngil Island in Medellin town, northern Cebu.

Niñachleo Dianne Saplad, a resident of Medellin, said she and her family were on board a pumpboat on their way to Funtastic Island, a  popular tourist spot on Gibitngil Island, when they saw a man, a girl and a boy sitting on top of a  capsized orange motorboat.

“The father was waving his hand to call our attention,” said Saplad.

She said other boats passed by the area but could not extend help because their boats were also small.

The two children transferred to their boat while Saplad’s uncle, Eduardo, threw a rope, which the father tied to his boat. While the boat was towed, the father hanged onto the capsized boat.

Unfortunately, Saplad said the rope tied to the capsized boat was cut. A big fishing boat  passed by and continued towing the boat to Gibitngil.

His son was about 8 to 9 years old while his daughter was young, about 6 to 7.

The three were not hurt except that they were hungry because they missed breakfast when the accident happened and were on top of the boat for an hour before they were rescued.

Saplad said the three went to Kawit in mainland Medellin town to buy 30 containers (each container has 5 gallons) of water for their personal consumption and to be shared with neighbors on the island.

Saplad said the boat was overloaded because of the cargo.

Saplad said most of the people of Gibitngil, a tourist destination, have been fetching water from the mainland because local authorities have not installed a system to bring water to homes.  SFM