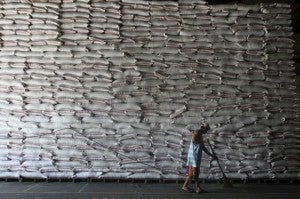 DAVAO CITY – Valencia City Councilor Helen Bernal, a rice trader and owner of a warehouse in that Bukidnon city, denied allegations made by the New People’s Army that she has been hoarding rice and taking advantage of farmers through usury.

Bernal, in a radio interview Wednesday afternoon, made the denial after New People’s Army rebels carted away 1,384 sacks of rice and several appliances, including two Sony flat screen TVs during a raid on her warehouse on Monday.

She added that the warehouse had no security guard because her family had no known enemies in Bukidnon.  She said she was grateful that nobody was killed during the NPA attack.

Ariel “Inda” Magbanwag, spokesperson of the NPA’s South-Central Bukidnon Subregional Command, issued a statement saying the rice confiscated from the warehouse of Bernal would be distributed to residents affected by the drought.

“Within 15 minutes, the NPA confiscated 1,384 sacks of rice and loaded them into four trucks,” Magbanwag said.

The NPA spokesperson then accused Bernal of being a rice hoarder.

The Bukidnon provincial police said the warehouse secretary Connie Martinez told investigators that 60 armed men entered the compound and commandeered four trucks of rice with an estimated worth of P2.476 million.

Police added that the rebels also carted away a television set, a computer unit, a printer, 15 cellular phone batteries and P30,000 in cash.

Magbanwag said the confiscated rice would be immediately distributed to villagers affected by the drought in Bukidnon.

Magbanwag said more than a thousand sacks of rice would not be enough to end the hunger of the farmers hit by the drought but the rice would still be a minor relief.

He did not say what the NPA would do with the computer monitors, the AVR and sander tools.

Magbanwag accused Bernal and her family of being the “biggest comprador-usurer in the whole rice paddy area in Valencia City and its adjacent towns.”

“She controls the lives of the numerous peasants under her wide network of usury operations. She also controls other small rice traders in almost the whole of Bukidnon. Whoever intends to invest in the Valencia rice fields would be required to negotiate with her to avoid bankruptcy,” Magbanwag said.

Magbanwag also accused Bernal of being involved in alleged anomalous transactions with the National Food Authority (NFA) and rice smugglers in Iligan City.

“She is also associated with the big officials of the said agency. For a long time now, it has been her modus to re-mill and re-sack NFA rice and then sells them to traders as well-milled and premium rice. She accumulates super-profits from this crooked transaction,” Magbanwag said.

“Despite the worsening hunger …and the scarcity of rice … due to the prolonged drought, the thousands of sacks of rice owned by the taxpayers were discovered by the NPA attackers hidden in her giant warehouse complex, which measures approximately three hectares,” Magbanwag said.  SFM