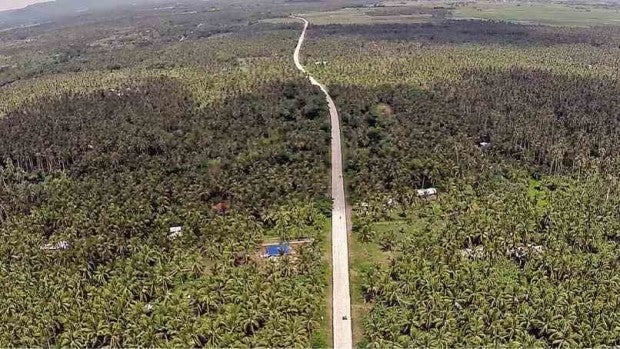 LUCENA CITY—Beset by traffic problems along the Maharlika Highway, the Department of Public Works and Highways (DPWH) opened a 24-kilometer road that connects the provinces of Quezon and Batangas while providing motorists a scenic view of the countryside.

Motorists using the ecotourism road will also be treated to a splendid view of Mt. Banahaw, verdant rice fields and coconut plantations, Cleofas said. “They can even scout for future vacation venues along the rows of beach resorts in Sariaya town,” he said.

Opened in mid-March, the road has five concrete bridges and will serve as an alternate route to Maharlika Highway that traverses Quezon, Laguna and Batangas, passing through the Batangas towns of San Juan, Rosario and Ibaan on the way to the Southern Tagalog Arterial Road (Star) Tollway that connects to the South Luzon Expressway (SLEx).

It also aims to boost the economic and tourism potentials of Sariaya, considered one of the major tourist destinations in the coastline of southern Luzon.

Travel time from Lucena City to Metro Manila via Maharlika Highway, a 126-kilometer route, takes about four hours because of traffic gridlock, especially on sections of the highway leading to town and city centers.

By using the ecotourism road, motorists will negotiate a longer 149-km route but travel time would take only three hours.

James de los Reyes, who travels regularly from Lucena to Metro Manila, said the new road cut his travel time by 30 to 45 minutes.

Though there are occasional gridlocks in the towns of San Juan, Rosario and Ibaan, De los Reyes considered these “tolerable” compared to time spent on the road in chokepoints along Maharlika Highway.

“But I’m still wary of taking the ecotourism road at night. It seems deserted with only few vehicles using it,” he said.

Traffic flow on the section of Maharlika Highway, which cuts through Sariaya’s town center, slows down because of narrow streets and the volume of vehicles that include motorcycles and tricycles jockeying for every inch of road space.

To address the problem, the DPWH planned to widen Sariaya’s main road. The project, however, was opposed by heritage protection advocates and owners of old houses who feared that it would damage their properties. 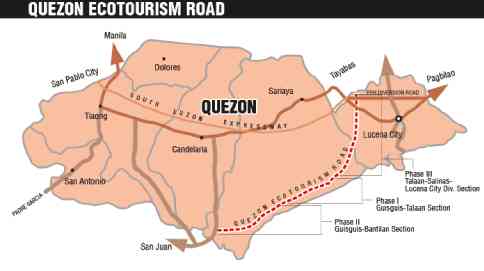 The opposition forced the agency to revise the plan and settle for six loading and unloading stations on the main road—two bays each in the market area, on General Luna Street and in front of the plaza.

Conservationists continue to oppose the revised plan, however. In December last year, the DPWH stopped the project after the completion of the loading bays in the market area and construction of one station in the town center.

“Perhaps if the incoming local officials will be supportive of the project, we will continue the road plan inside the town proper,” Cleofas said.

The ecotourism road project was started in 2006 and was supposed to be completed in 2011. Road right-of-way payments and shortage of materials due to suspension of quarrying at the foot of Banahaw in Sariaya delayed its completion.

Cleofas said the new road would also provide a faster, safer and shorter travel time from Metro Manila to the Bicol region.

With existing bypass roads in Tiaong and Candelaria towns in Quezon, the completion of the ecotourism road will help ease traffic woes of motorists along the central parts of Quezon.

A 7.2-km bypass road is also being constructed in Sariaya. Barring road right-of-way problems, it is expected to be finished in 2017.