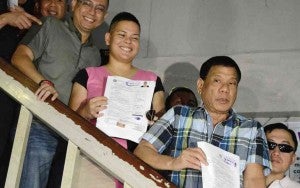 ILOILO CITY — Davao City Mayor Rodrigo Duterte does not believe that his daughter, Sara, a former Davao City mayor herself, was raped as she earlier claimed.

“Hindi ma rape ‘yan si Inday,  nagdadala ng baril’ yan (Inday can’t be raped. She carries a gun),” Duterte told reporters in an ambush interview at the University of the Philippines Visayas in Iloilo where he spoke at a forum.

Duterte said he had no previous knowledge of his daughter’s claim.

He said he did not want to comment further because it was personal matter for his daughter.

But during his speech, he again expressed doubt about her statement, calling Sara a “drama queen” in jest.

Sara told reporters on Monday that she too was a rape victim but was not offended by her father’s joke about the gang-rape and murder of Australian missionary Jacqueline Hamill in 1989 at a Davao City detention center.

Duterte apologized Tuesday morning for the rape joke he dropped to the crowd during a campaign rally last weekend, two days after he flatly refused to do so.

Duterte, already Davao City mayor in 1989, recalled overseeing the police response to the hostage-taking of missionaries at a Davao City detention center.  The missionaries held hostage by detained criminal suspects included Hamill, who was gang-raped and then murdered by the hostage-takers who slit her throat.  Duterte recalled seeing Hamill’s body and remarking how beautiful she was and that the hostage-takers got to her before he could (“Naunahan pa ang mayor. Patayin silang lahat. [They did it ahead of the mayor. Kill them all.]).  SFM