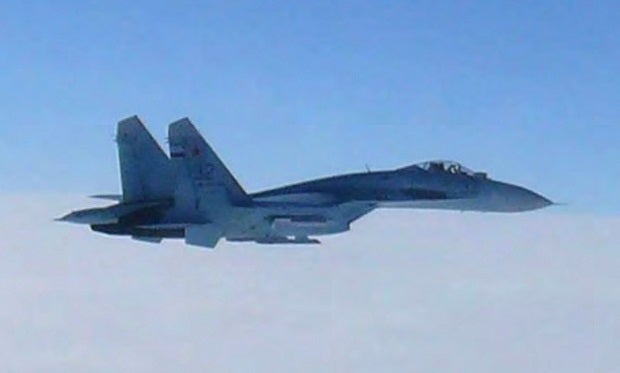 In this Feb. 7, 2013 file photo, a Russian SU-27 fighter jet flies over the sea off the Japanese island of Hokkaido. The Pentagon said a similar military aircraft barrel rolled over a US RC-135 spy plane as it flew in international airspace over the Baltic Sea. AP

WASHINGTON, United States — The Pentagon on Monday described last week’s “unsafe” maneuver by a Russian fighter that flew close to a US spy plane, saying it had performed a barrel roll.

Thursday’s “unsafe and unprofessional” incident came just days after Russian aircraft repeatedly buzzed the USS Donald Cook in a series of incidents decried by the US military.

In one case, a Russian Su-24 flew 30 feet (nine meters) above the war ship in a “simulated attack profile,” according to the US military’s European Command.

Ties between Russia and the West have plunged to their lowest point since the Cold War over Moscow’s 2014 annexation of the Crimean peninsula from Kiev and its support for separatist rebels in eastern Ukraine.

It did not appear that the Russian jets were armed in any of the incidents, the Pentagon said.