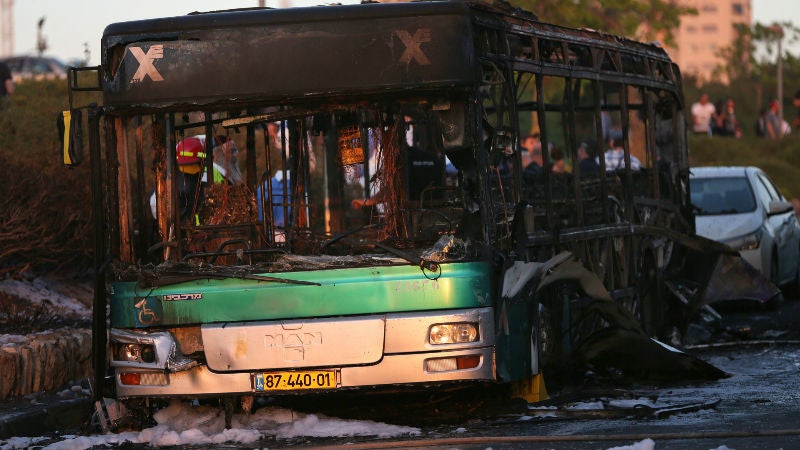 A burned bus is seen in Jerusalem, Monday, April 18, 2016. A bus exploded in the heart of Jerusalem Monday, wounding at least 15 people who appeared to have been in an adjacent bus that was also damaged. The explosion raised fears of a return to the Palestinian suicide attacks that ravaged Israeli cities a decade ago. (AP Photo/Oded Balilty)

JERUSALEM — A bus exploded in Jerusalem on Monday, wounding at least 21 people in what police said was a “terror attack,” raising fears of a return to the Palestinian suicide bombings that ravaged Israeli cities a decade ago.

“There is no doubt that this was a terror attack,” Jerusalem police commissioner Yoram Halevy said. He said it was too early to know the identity of the attacker or if it was a suicide bombing.

“We are investigating where the explosive device came from, who planted it, how it got on the bus. All this is in the initial stages of investigation,” he said.

Police spokesman Micky Rosenfeld said 21 people were wounded in the attack, two seriously, seven moderately and the rest lightly. Another bus and a car nearby were also damaged by the explosion.

It was not clear how many people were on the bus at the time it exploded. Police said the blast was caused by an explosive device detonated at the back of the bus.

Bus driver Moshe Levy told reporters he checked his bus for bombs twice before he started his journey. He said he was in a traffic jam when “suddenly there was an explosion in the back, I immediately understood it was a terror attack, I opened the doors of the bus so people could escape and told them to get out.”

Israeli Prime Minister Benjamin Netanyahu vowed retaliation. “We will locate those who prepared this explosive device. We will reach the dispatchers. We will also reach those behind them. We will settle the score with these terrorists.”

The blast came as jittery Israelis prepared for the Passover holiday amid a seven-month wave of Palestinian attacks, mostly stabbings, shootings and attacks where cars were used as weapons against civilians and security forces.

In that time, Palestinian attackers killed 28 Israelis and two Americans. At least 189 Palestinians have been killed. Israel says most of the Palestinians killed were attackers, with the rest killed in clashes with security forces.

For some, the bombing was reminiscent of attacks by Hamas and Palestinian Islamic Jihad last decade when the Palestinian groups sent suicide bombers to detonate their explosives in buses and cafes.

Hamas, the militant group that rules Gaza, issued a statement praising the bus bombing but did not take responsibility for it. Some mosques in Gaza also welcomed the attack with messages of praise broadcast from loudspeakers.

A spokesman for Hamas in Qatar, Husam Badran, said “This attack affirms to everyone one that our people will not abandon the resistance path.”

The current round of bloodshed was triggered in September by unrest at a major Jerusalem shrine revered by both Muslims and Jews, and quickly spread to Israel, the West Bank and the Gaza border.

Israel says the violence is fueled by a campaign of Palestinian incitement compounded on social media sites that glorify and encourage attacks. Palestinians say the violence is due to a lack of hope for gaining independence after years of failed peace efforts.