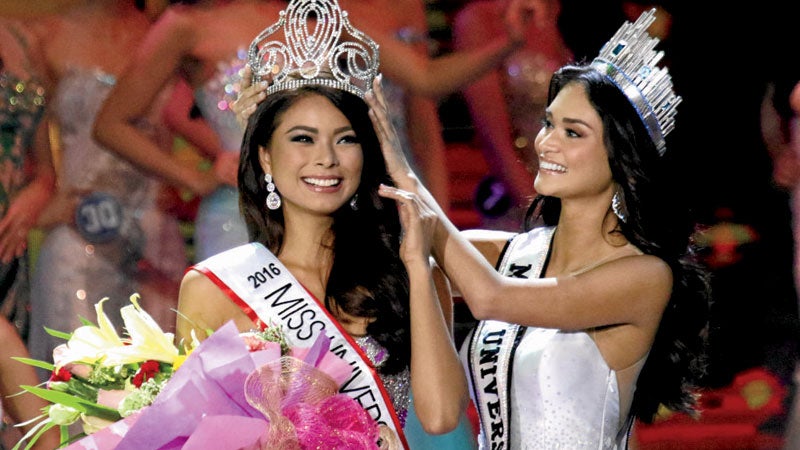 SHORTLY after they were proclaimed winners in the wee hours of the night, the new Binibining Pilipinas beauty queens fearlessly spoke their minds about women empowerment and current controversial issues.

Newly crowned Miss Universe Philippines Maria Mika Maxine Medina and the other winners were asked in a press conference about their stand on rape being the subject of jokes, apparently stemming from remarks made by presidential candidate, Davao City Mayor Rodrigo Duterte, that went viral online.

“It’s not a good thing. We are all celebrating beauty here in pageants. For me it is something that we need to study more,” said Medina, who drew the challenge of securing a back-to-back victory in the Miss Universe pageant after Pia Alonzo Wurtzbach bagged the international title in December last year.

Binibining Pilipinas International Kylie Verzosa said: “It’s a sensitive topic, there are many rape victims. The Philippines is a very conservative country, not a lot of people open up about it. I know there are a lot of sexual harassment cases, and women should open up some more. This affects mostly women, and they should assert themselves.”

Verzosa will gun for the Philippines’ sixth Miss International title later this year.

Even the questions thrown at the contestants during the final round of the pageant at Smart Araneta Coliseum in Quezon City elicited strong responses.

When asked what international issue she would want to focus on as an ambassador of goodwill, Binibining Pilipinas Intercontinental Jennifer Hammond expounded on terrorism.

“It is one of the major problems of the world right now. I would encourage people to fight for their beliefs by kind words, communication. Communication begets understanding, understanding begets tolerance, and tolerance begets peace,” she said.

Hammond, who won the best in evening gown competition, will try to surpass the second-place finish of her predecessor, Christi Lynn McGarry, in the Miss Intercontinental competition in Germany last year and secure the Philippines’ first victory.

Standard pageant questions were also asked, to which the contenders gave brilliant answers.

When asked to choose between a multimillion-peso business or a crown, Binibining Pilipinas Supranational Joanna Eden said: “I know it sounds like a  cliché, but I choose to have a crown. Because with the crown comes, not the responsibility, but the ability to inspire people. If we start with each individual, we can help better the world.” 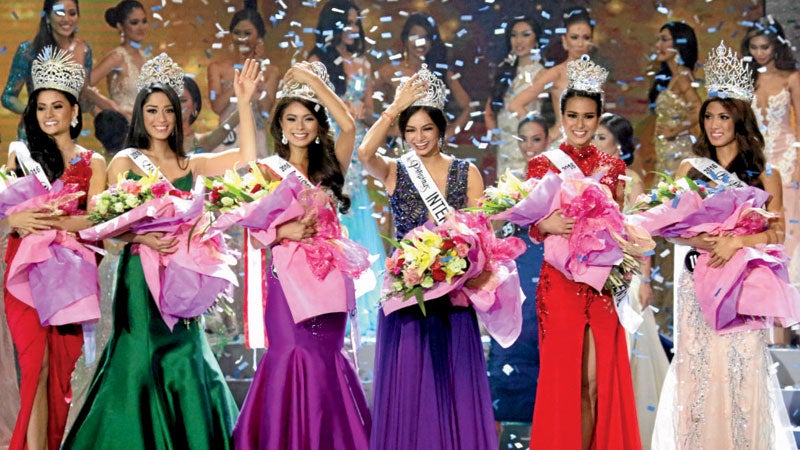 Eden, who won the  best in swimsuit competition, will fight for the country’s second victory in the Miss Supranational pageant.

She will compete in the three-year-old Miss Grand International pageant and try to secure the Philippines’ first victory there.

Manalo said the toughest challenge of a Filipino woman her age “is to be courageous, determined and resilient.”

She added: “I will tell the women to continue to have that quality. Because if you have that quality, you can stand for what you believe in, you can transform not just yourself, but society to the best version of it.”

Verzosa, who also received the “Face of Binibini,” “Readers’ Choice” and “She’s So Jag” awards, was asked by 2015 Miss Universe second runner-up Olivia Jordan why she deserves a crown.

“The person who deserves to win a crown tonight is the person who worked hard for it and is willing to do everything to continue the legacy of the Philippines. She is confident with an attitude, and has personality. I believe I am her,” Verzosa said.

When asked what advice she would give a 15-year-old who wants to stop going to school, Medina said, “Study hard. Education can make you a better person.”

This year’s pageant also showcased Filipino designers. The contestants’ shoes were provided by Jojo Bragais, while their swimsuits were designed by Domz Ramos.

The candidates were also allowed to wear an evening gown of their choice, and they all donned Filipino creations. In the previous years, Binibining Pilipinas Charities Inc. provided the gowns, shoes and swimsuits bought overseas.

Filipino-designed national costumes were earlier showcased and from which the winner of the best in national costume competition  was chosen. The award went to physician Angela Lauren Fernando, who wore a stylized Filipiniana terno crafted by Frederick Peralta.

Another special award winner was semifinalist Vina Openiano, who was proclaimed Miss Friendship and Miss Talent.

The five-hour coronation ceremonies started at 9 p.m. on Sunday. ABS-CBN aired a delayed telecast of the program but shifted to live broadcast for the farewell walk of the 2015 winners and the proclamation of winners.