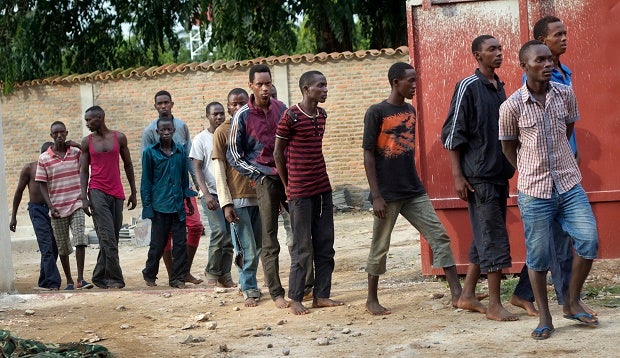 In this Saturday, Dec. 12, 2015 file photo, men captured by the security forces, who were said by them to have been involved in attacks on military targets but which could not be independently verified, are paraded during a press conference at the country’s intelligence service headquarters in the capital Bujumbura, Burundi. An online network of Burundian activists is trying to bring international attention to what it says are rising incidents of people being disappeared by local police and intelligence agents. AP File Photo

UNITED NATIONS, United States—Calling the situation in Burundi “alarmingly precarious,” UN chief Ban Ki-moon is proposing three options for a new UN police mission there, ranging from a full force of 3,000 officers to a light dispatch of 20 to 50.

The options were detailed in a report to the Security Council obtained by AFP on Saturday, two weeks after the council agreed to send a police force to the African country to help quell a year of violence there.

In the report, Ban said dispatching a force of up to 3,000 was “the only option that could provide some degree of physical protection to the population” but that the mission would take months to prepare and present logistical challenges.

A second option, he said, would be to send 228 UN police officers to work with human rights officials and possibly with African Union monitors to provide early warning, but it would not offer any protection to civilians.

The secretary-general said the council could also decide to send a group of 20 to 50 officers who would assess the Burundi police force and “help bring about concrete and measurable improvements in the respect for human rights and rule of law.”

The council is under pressure to take action in Burundi where the descent into violence has raised fears of mass atrocities, similar to those that convulsed neighboring Rwanda in 1994.

Burundi has been in turmoil since President Pierre Nkurunziza announced plans in April last year to run for a third term, which he went on to win.

Violence has left more than 400 dead and driven more than 250,000 people across the border.

Diplomats said the proposed force of 228 police officers appeared to be the best option, but it remained unclear if Bujumbura would accept that many officers.

The government has told the United Nations that it was ready to receive some 20 unarmed police experts, but would oppose any “large” UN police presence.

Ban’s proposals followed the adoption earlier this month of a French-drafted resolution that called for the deployment to monitor the security situation and help promote human rights.

“The security situation in Burundi remains alarmingly precarious,” Ban wrote in the 11-page report to the council sent late Friday.

“Even as hand grenade attacks on public venues peaked in late February, attacks targeting military and police personnel, including assassinations and abductions, have increased.”

Ban cited a “rising trend in enforced disappearances, arbitrary arrests, illegal detention and ill treatment and torture,” although the number of killings has decreased in the past two months.

The proposed police force would allow the United Nations “to maintain situational awareness” and could help develop a strategy to address the crisis, Ban said, but he warned that it was no substitute for a political dialogue.

The United Nations has repeatedly called on Nkurunziza to open up serious talks with the opposition on ending the crisis, but the appeals have been ignored.

The African Union in January abandoned plans to deploy a 5,000-strong peacekeeping force after the Bujumbura government rejected what it described as an “invasion force.”